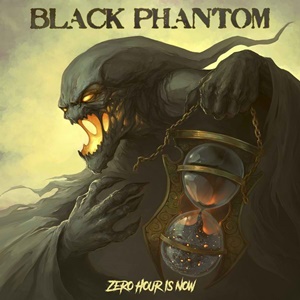 All facets of Iron Maiden seem to be covered for influences – a song such as “Hordes of Destruction” for instance has some guitar/bass harmonies that meld well to the Brave New World-era, singer Manuel Malini floating to the upper tier of his falsetto range, and also engaging some whistling aspects against a calmer, clean guitar conclusion. At other times these musicians choose to sit in mid-tempo anthem mold, “Schattenjäger” allowing Andrea to showcase a bit of his progressive slap expertise while the catchy chorus is perfect for that windows down, highway cruising soundtrack we need when you want the stresses of your day to subside. Black Phantom won’t necessarily be the most dazzling when it comes to their main riffs and combinations – but when exploring the grey areas of their sound, such as a ballad like “Either You Or Me”, there are some solid melodic aural aspects to latch onto, the guitarists building anticipation from the clean to heavy segmentation. Keyboard nuances give “Hands of Time” a second half dynamic twist before the main riff and rhythm section support bring your headspace right back to Iron Maiden – which isn’t a bad thing considering that many miss this side of the band as they’ve been exploring more of their progressive rock influences during the past decade.

Understand that production-wise, Andrea’s bass plays as prominent a role to the band’s musical foundation as the guitars – giving Zero Hour Is Now that thick, low punch in the gut as the lead breaks also possess the guitar hero-esque touch. While not necessarily pristine and very much in your face, Black Phantom keep traditional heavy metal top of mind for this release and as a result, deliver some headbanging material.