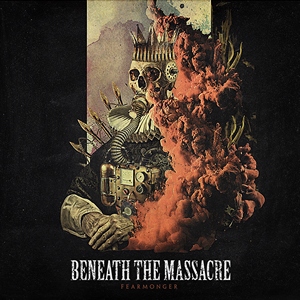 What is it that drives people into extreme music? Inevitably, one could argue that many dig into the genre for the adrenaline rush and nuanced musicianship. While some bands attempt to bring in different flavors, which also works if you are looking for some varied content, so acts have forgotten the more brutal and devastating aspects in order to push musicianship further. Well, Beneath the Massacre have returned from dormancy to remind extreme metal fans that they can in fact, have it both ways without compromise.

Wasting no time, “Rise of the Fearmonger” gives listeners little chance to ease in. There’s nothing short of an explosion of blast beats, dizzying riffs and melodies, damn brutal vocals. It’s precisely the combination of elements that anyone waiting since 2012’s Incongruous would want to hear. Initially, it’s an exhilarating speed rush that is just to pulsate through your speakers and knock your head backwards. Given the 10 track total in 30-minutes, it’s also something that comes relentlessly until the end. The short window lets Beneath the Massacre run rampant with disorienting velocities and delirious technicality. They also are able to pull off something better than most deathcore acts – breakdowns. Whenever they dig into a breakdown, you are going to feel it. The sound is pulverizing, due to an actual build-up and execution instead of haphazardly tossing them into the track – check out “Bottom Feeders” for some real bludgeoning. While the speed factor should be enough to make extreme metal fans giddy, what makes the album last in the long run is the little pieces that start to be absorbed as addition listens sink in. The technical melodies are as playful as they are frenetic, tickling your ear with their nuance as they simultaneously scream into them unrepentantly. “Flickering Light” uses a number of these moments as the speed maintains at a high level, while the guitars noodle away with precision. “Bitterest End” as the finale leaves the listener with one of the best solos of the disc as a nugget to return to.

It’s hard to argue with the type of abrasion that Beneath the Massacre has returned with on Fearmonger. The carnage sticks with you long after each listen, and the short run time assures that you are still hungry to give it another go at maximum volume – inviting you to really dig into its layers. It’s early in the year, but it’s going to be tough to top Fearmonger if you dig extreme music. 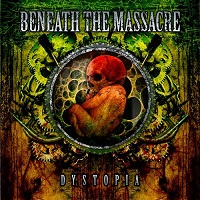