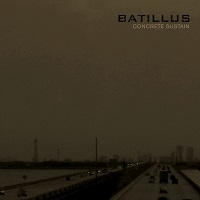 Intended to reflect the rust and decay of urban sprawl, Batillus’s Concrete Sustain is an album that is supposed to take a trip back to the short-lived mid-90’s industrial/alternative metal explosion. As in, a combo of Helmet and Ministry, with black metal elements thrown in. Yeah, it’s not a very common thread these days, and even the most casual of listener is probably waiting to be sucked into the d-beat, crust wind tunnel, but it never comes here. Simplistic, probably more than it should be, Concrete Sustain plods and plods, never quite reaching any sort of engagement.

The one-word song titles are clever and are almost seen as a novelty, which goes to show how porous song title conventions have become. Therefore, it’s in the visuals the band presents where some identity if forged, because it’s not coming from these unimaginative, rather drab riffs. Opener “Concrete” has trouble locking in, and “Cast” is overwhelmed by the teaming rasp of singer Fade Kainer. Further trouble ensues on “Beset,” which is one of those now terribly common slow-mo, chug-laden songs that tend to appeal to those who probably want zero excitement out of their music.

By the time “Rust” rolls around (the only song here with any purpose), Concrete Sustain has already embroiled itself in the rather deadened sphere of industrial metal. A cool-sounding idea on paper, but really guys, let’s get out of the dumb riffs doldrums and do something marginally interesting.