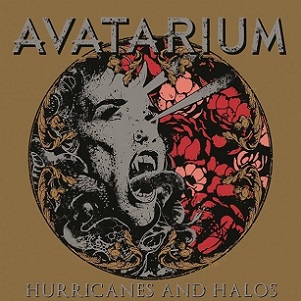 Certified doom legend Leif Edling may no longer be the face of Avatarium (that falls onto singer Jennie-Ann Smith), but his stamp, evidently, is all over the band’s third album, Hurricanes and Halos. Credited with six of the eight songs here, Edling’s ability to volley from his classic doom template to classic rock is a testament to the man’s songwriting capabilities. No longer does Avatarium bear the stamp of Candlemass with a female singer. That started to erode on 2015’s The Girl with the Raven Mask. On Hurricanes and Halos, Avatarium have totally come into their own.

As noted, the metallic element that appeared on the band’s excellent self-titled 2013 debut is largely absent, replaced by a crisp, psychedelic angle that features Smith and her warm vocals. The instant nod goes to “The Starless Sleep,” a jangly, upfront rocker that pulls in, of all bands, ABBA. (Then again, Avatarium are Swedish.) Nevertheless, “The Starless Sleep” is the type of punchy, hook-laden jam that’s hard to resist, with guitarist Marcus Jidell pulling out the bends-a—plenty.

There’s a semi-dip with “Road to Jerusalem” and “Medusa’s Child,” the latter hampered by children’s vocals, but the hard-charging, Deep Purple-inspired “The Sky at the Bottom of the Sea” and relaxed, altered-state “When Breath Turns to Air” truly display Avatarium’s new-found versatility. Smith, again, is on point, in particular on “When Breath Turns to Air,” her voice expressing a degree of vulnerability and honesty.

The Girl with the Raven Mask can be considered a speed bump in comparison to Hurricanes and Halos. Avatarium, after some tinkering, have found their sound and stride, creating an album that deftly maneuvers itself between the mysterious air of Jefferson Airplane and vintage hard rock.

AVATARIUM Releases Lyric Video For “Girl With The Raven Mask”