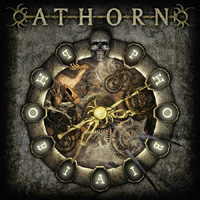 Hailing from the festival metal Mecca of Germany, Athorn seemingly arise out of nowhere to label rank status in a mere two years, releasing only one EP Livable Hatred in the process. But the five-piece does have some previous band experience, most notably vocalist Carsten Frank with Human Fortress and Galloglass, so one shouldn’t be shocked that Phobia as a debut album contains viable musical chemistry. I just remain skeptical as to the long-term appeal based on these 10 songs.

Guitarists Stefan Schonebeck and Tobias Liedke study at the feet of Jeff Loomis and the Darkane axe duo, alternating between arpeggio-laced soloing and that heavy, down-tuned rhythmic tone that separates those who think they love metal from others who die for the cause. The snare sound has that slightly hardcore open bounce technique that can send nails down a chalkboard – very evident on the slower, emotional title track.

I’d categorize Athorn in that power-meets-thrash with modern groove capable category- although I think an act like Denmark’s Mercenary obliterates Phobia a thousand times over. Carsten alternates between clean melodies and a raspy roar, the right front person for the aggressive material on display- his best work including the tempo shifting “Angel of the Fall” and Nevermore meets Machine Head stomp of “From Beyond”.

It’s one thing to be aggressive and to showcase your instrument knowledge; it’s quite another to synthesize riffs and parts into flowing songwriting craftsmanship. With this debut, it’s like the crock pot meal that hasn’t simmered enough to make all the outside elements gel as one.