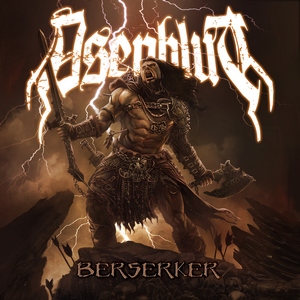 Ever wondered what Amon Amarth would sound like if they embraced some black metal elements and upped their heaviness just a smidge? Wonder no more, as Asenblut have returned with their third album (and first for new label AFM Records) and have brought with them exactly that formula. Though it may be a familiar sound, these Germans do know how to bring their A-game in songwriting.

While the opening sentence does really encapsulate everything about Asenblut’s sound, it’s not without its nuances. It doesn’t take long once you get into lead-off “Berserkerzorn” to hear the Amon Amarth influences. A good, mid-tempo stomp ensues along with some wildly catchy melodies until the song moves into blastbeat-ridden territory (and then an excellent guitar solo) – these are all areas where the band excels throughout the remainder of the album, particularly the guitar melodies. “Titanenerbe” opens with a more traditional heavy metal melody before raising the stakes into death metal range, and “Drachenborn” pulls no stops from the get-go, with some of the strongest melodies of the release. But the brutality does still reign, with “Offenbarung 23” and “Schatten über Arkham” both serving up some near-thrash riffing (and blasts on the later) to accompany the mid-tempo thunder that the band can bring, while “Auf den Feldern von Flandern” brings some tremolo picking. The album is rounded out with a production that nicely accents the heavy riffs (keeping them nice and heavy) while making sure there’s a clear sound to be had.

Sure, there’s some definite Amon Amarth-isms in Berserker, but it never takes away from the overall package. Asenblut is quite adept at dishing out high quality melodies without saturating their heaviness, making Berserker a fun trip to take.