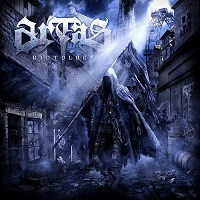 that are able to do such things (like Artas) have the propensity to get a little carried away with how varied and scattershot they can actually be, so it’s not much of a reach to say that Riotology manages to function without a true foundation. Plus, the album cover had us totally tricked into thinking this was a power metal album. Tricky, tricky!

Operating under the guise of modern metal, these Germans evoke a hearty mix of metal and deathcore, all the while blending in pigments of radio rock and songs in their native tongue. It’s all over the map. And since there’s such a propensity to do everything all at once, Artas don’t do one thing better than the other, although we’ll give kudos to the various acoustic bits that pop up throughout this slightly obese 16 song

There are several brutal and blistering moments to be heard on “The Day the Books Will Burn Again,” along with atypical metalcore shards on “The Grin Behind the Mirror” that would make Misery Signals and friends clamor for songwriting credits. Subsequent gruelling and hard-nose guitar

chugs are perhaps the defining trait here, if there could be one, for Artas are in love with saddling into those deep-saddled grooves that draw circle pits and spin-kicks from the punters. At least that’s how we roll in North America; not sure if this is as vibrant in Germany.

The wide spread of sounds allowed in today’s metal geography allows for bands like Artas to exist. They’re every bit as modern as the next cyclops-haired band, and while there is some merit to keeping up with the times, one has to wonder how they’ll be sounding five years from now when (hopefully) metalcore and deathcore are things of the past…