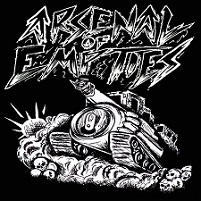 This is the sound of being slugged by a biker drunk on rage because his wife left him and fucked the neighbor. This is the sound of waking up in a dark alley covered in blood and hobo hair. This is the sound of a mountie looking at you in disgust as he pulls you down from a tree after having disemboweled a bear in a meth-rage. This is grime, this is filth, this is fucking awesome. This, of course, is the whirlwind sound of thrash/grind/hardcore purveyors Arsenal of Empties and the hyper-brief putrescence they provide.

Across the 11 tracks and (almost) 16 minutes, there is only one thing that really comes across here: filthy rage. These are all lightning quick and straight to the point (no ‘song’ ever reaches the two minute mark), but this isn’t grind in the –core sense, there are no triggers or outlandish drum-machine tricks here, just an onslaught of blast beats and fury. Take a stop anywhere and you’ll find nothing in particular to set the tracks apart (though “Johnny B” does have about 20 seconds of respite before setting you on fire again), and that’s alright, you don’t come into an album like this expecting the eclectic.

Something of a trashcan dragon of a work sonically, though everything sounds evenly present, the bass especially being surprisingly audible and gloriously nimble throughout. This is brutish and grimy work, the true sound of the bottom of society uprooted and brought to light. One could wax and wane all day on the philosophical repercussions of an album like this and the state of the world, but why bother? Step in, lose yourself, and within seconds be willing to recite the closing mantra of “Amount to Nothing”: