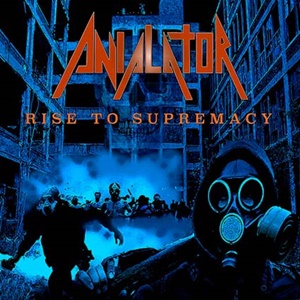 This Texas thrash act first came on the scene during the early mail order years of Wild Rags, a California distribution company who had a store front and sold many a demo tape and fanzine back in the day. They also issued two EP’s during the late 80’s for Anialator before dissolving in 1989. Back again for a second go around since 2015, Dave Rotten certainly remembered their effort, issuing a compilation album Mission of Death last year and signing the group for Rise to Supremacy, a five-song outing that proves the band’s penchant for heads down, speedy affairs have not lost any spirit or passion for those older days.

Immediately you’ll notice a rather loud drum mix which occasionally washes out lower nuances of the guitars and bass – although you’d be hard pressed not to feel the crushing weight of speed riffs and equally rabid Mille meets Phil Anselmo-esque vocals from Angel Gonzalez right away for “Embrace the Chaos”. The stop/start mechanics and panned vocal effects for “Rise Again” circle back to bygone days, the wah-wah lead break elements and frantic bends typify Anialator in a go for broke stance, only slowing down when necessary before ramping the proceedings up to nuclear explosive levels. When the band choose to keep things in more of a controlled, mid-tempo fashion, they come off a bit more in that Exodus/Bay Area mold for “Thick Skinned” – although some of the lower-tuned riff action possesses that early 90’s power groove sheen, if put into a much more primal, forceful context. Because of the tidy 19-minute run time, Rise to Supremacy delivers potency in a fair, consumable product – but much like many of those mid-to late 80’s acts bubbling under the surface, it’s not exactly delivering standout material that you walk away from remembering even after numerous passes.

Underground maniacs and love it all thrash lords probably will find something to treasure about this EP – but the majority will probably pass and seek out the latest Kreator, Destruction, or Warbringer records for their speed fix.