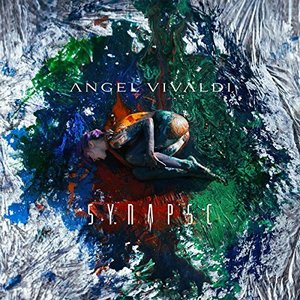 While this scribe’s first introduction to Angel Vivaldi’s playing was through his guest solos with I Legion, he has been building up a profile as a guitar virtuoso for quite some time (starting back in 2003). His fifth release, Synapse, is a concept album based on specific brain chemicals/hormones and inciting different emotions (one per song). He even went so far as to paint the studio 8 times to visualize each individual song with its associated color.

Given this scribe’s science leanings, it was interesting to listen to each track with some knowledge of the chemical at hand. “Adrenaline” goes without say in opening up the gates to the album and getting one excited to hear more. Vivaldi’s playing style takes more virtuoso leanings yet due to the short song lengths and surprisingly melodic integration, nothing ever becomes overbearing. It never plays off as being self-indulgent no matter how impressive the guitarwork is. Instead, they still feel more akin to actual ‘songs’ than just showcases of proficiency and skills, undoubtedly the mark of a true professional. But in getting back to the songs themselves (and their associations), “Oxytocin” (commonly referred to as ‘the love hormone’) is a more laid back affair that pulls you in with playful melodies, as does the slower riffing of “Seratonin” (which regulates anxiety/happiness/mood). “Dopamine” is an utterly addictive track with serene melodies backing some crunchy riffs, while “Endorphin” certainly induces feelings of euphoria with some of the album’s most soaring leadwork.

Synapse is an intriguing concept that works on a number of levels. For the science-y, you can listen to the tracks interpretations of the brain chemical. For the guitar fanatic, there’s plenty of gorgeous playing to investigate. And for everyone else, the melodies within will provide just the ticket for an escape from the here and now. Thoroughly enjoyable material.