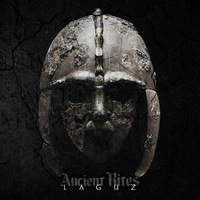 For us underground quasi old-timers, Ancient Rites are a blast from the past. The Belgium-based epic metal troupe can be credited as being one of the real standard-bearers for heroic, cinematic, and challenging metal in the context of extremity. Their 2001 Dim Carcosa album in particular was a minor sub-genre gem, as Gunther Theys and crew charged and dashed across new terrain that crossed boundaries between folk and symphonic metal. But alas as they story normally goes for bands ahead of their time, Ancient Rites have not been the most productive of outfits, taking five years to follow-up Dim Carcosa with Rubicon, and another nine to release Laguz.

Theys’ vocals have always been the most take-it-or-leave-it component of the band. He doesn’t sing or grunt as much as he does narrate in key. It’s an odd vocal approach for music with this much bravado, but man, it’s what gives Ancient Rites their charm. On Laguz, Theys has his moments, most notably his underworld bellows on “Von Gott Entfemt,” which could be the album’s adventurous number, with pounding keyboards and a surplus of blast-beats. Elsewhere, the staccato churn of “Apostata” puts Ancient Rites in Dimmu Borgir territory, if only not for Theys imitable vocals, while the heroic “Mind Unconquered” and “Frankenland” simply pad a running order that is without a dud.

The uninitiated may look at Ancient Rites and figure they’re nicking their ideas from Eluveitie, Ensiferum, Tyr, and gang, but history shows the Belgium bunch pre-date all of these bands. History aside, Laguz is a deep, agile body of work that embodies the true spirit of epic metal circa 2015. ‘Tis a shame the band is not as productive as they could be, but then again, it’s the quality that counts, making a release like Laguz a can’t-miss.