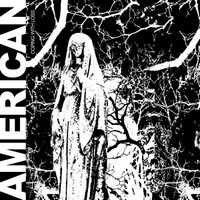 Sometimes an album tells a story thematically whether it intends to or not. Sometimes that story is gnarly to the point of absurdity. Both are equally applicable here with this extremely dark debut from Virginian duo american (yes, lowercase all the time) and their riffy sludge/black metal musings. The blackend sludge is something of an ‘it’ thing this year and it takes a lot to pull off well, fortunately for this pair they knock it out of the park. This is a series of images painting the world after it’s already lost and it’s much too late to do anything about it. Coping With Loss, really, is title more fitting than perhaps any other album this year.

And what loss it is that resonates between these tightly drawn serpentine halls, six relatively short works that detail the ground zero of a calamitous event (“Ritual Suicide”), with an extreme inclination toward distant abysses as its blastbeats and wailing leads twist into submission any listener resistance. The speed is tempered with crushing and despondent follow-ups over several of the tracks that follow, the two ends not used in equal measure, but still managing to maintain a viable cadence, never allowing for comfort or distraction. When a faint sense of melody emerges from the murk and finds its way to center stage before “Solace In The Silence” gives itself to noise and a slow-dying bit of guitar, death has taken hold and only the many shattered echoes of ambition, the bastions of decisions unmade, the filth of a world gone to ash will remain.

And in mammoth 18 minute closer “Coping With Loss And The Insurmountable Guilt Of Existing” that despair is all there is. A gradual ebb and flow works across the very wide body of this ambient and occasionally noisey piece of work, thematically the core of the album and taking up almost half of its otherwise fat-free 40 minute run time. It’s the same kind of feeling that emerged after the curtain fell in Lars Von Trier’s phenomenal film Melancholia after Earth met its doom, an inevitability revealed early on in the film and resultant from one of the tensest 40+ minute buildups ever. The same kind of gut-wrenching dread exists at times here, in the shorter tracks and in the closer, an album certainly not for the faint of heart nor those reveling in bliss. For dreams abandoned and life-long projects unfulfilled, there exists an exquisite new platform with which to have your existential crises thrown back at you: Coping With Loss.