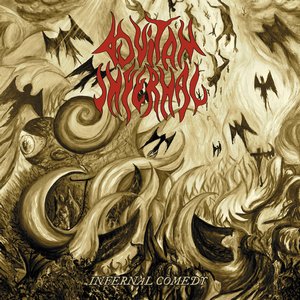 Reaching deep into that old school well, Ad Vitam Infernal also aren’t going to be what you picture when you think about ‘old school’ death metal. Instead, while there’s a reverence and go-for-the-throat mentality, Ad Vitam Infernal take that classic death metal attack and combine it with a thrashy side. Something that one doesn’t hear quite so much in our current century.

Thinking more along the lines of an Angelcorpse, early Morbid Angel, or Vader comparison, the music of Infernal Comedy (yes, in reference to Dante’s Inferno) often utilizes visceral thrash riffs and Slayer-esque vibes alongside a death metal framework. It makes for a release that is absolutely relentless in its pacing, and it rarely deviates from that energy (though there is a bit of atmosphere brought in a the end of “To Cross the Rivers” and some build-up in “Insane Prayer”). In other words, it’s a release that you have to really just buckle in and enjoy. What keeps the album from feeling one-note though is the attention to detail with melodies. Not the happy and cheery kind, but the riffs maintain a sinister vibes and the melodies often take on darker aspects to coincide with them. There’s blistering assaults in a track like “Rise! Our Souls…” but if you listen to the guitars, you can hear that effort to detail in keeping them somewhat melodic and memorable.

The focus on more genuinely ‘evil’ feelings and take your breath away pacing is what makes Infernal Comedy click. The attention to the little details is an added bonus that will give it more mileage than you might initially expect with its brutality, but it’s also what will give Ad Vitam Infernal some room to stand on as they move forward and try to carve out a name for themselves in the scene.