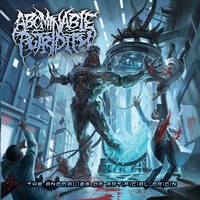 Abominable Putridity originally unleashed The Anomalies of Artificial Origin on the masses back in 2012 through Brutal Bands Records. Since that time, it saw a number of praises tossed its way, and the band signed with death metal juggernaut Unique Leader Records, and are in the process of prepping their label debut for some time in 2016. This re-issue is your usual, ‘stay relevant and buy some time’ type of release.

The Anomalies of Artificial Origin is brutal death metal through and through. One could actually go so far as to say that it is pretty much defined by the standards for those who follow the genre. There’s an abundance of chugging, slammy riffage, absurdly low bellows (courtesy of the renowned Matti Way of Disgorge and Pathology), and a monstrous production that compliments the whole thing. The brutality is unflinching in its power, even at the expense of really discerning the tracks – but Abominable Putridity knows the strength of this type of material is to get in and get out, with all clean-up accomplished within a span of less than 30 minutes. This does keep things running efficiently up to the end, though you may have a tough time remembering which song was which.

The Anomalies of Artificial Origin doesn’t exactly claim the originality award, but it’s crushing and intimidating presence does make up for it. This is brutal death metal for brutal death metal fans. Those who may have missed out on it a few years back will benefit from the re-issue (though most others admittedly will not), but keep your eyes and ears glued to the sound of the new material heading your way next year.