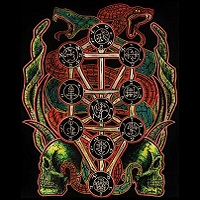 A.M.S.G. stands for “Ad Majorem Sathanas Gloriam,” or “For the Greater Glory of Satan” for you non-Latin buffs. This Edmonton, Alberta black metal troupe came to a life a year after the Gorgoroth album of the same name (2007), so there’s your standard poaching of the past, even though going the acronym route is pretty cool (and it throws Google for a loop, too). The band’s Anti-Cosmic Tyranny debut is a feral and strange offering; difficult to lock into, but even more hard to link these guys to any number of black metal bands, let alone one.

Perhaps the pint-sized production job is the first tell-tale sign of what emerges as a grim, yet bountifully progressive offering. While the snare clanks like a wet paper bag upon impact, the unique chord pairings courtesy of main dude Angelfukk Witchhammer keep the album from becoming too grounded. The saxophone solo on opener “Black Rites of Black Shadows” was an unexpected move, but it’s not like it was forced in there (looking at you, Ihsahn). It’s a complementary space oddity, laying the tarp for vocal change-ups on “Reincarnation of the Sun” and “Heretics and Ashes” as well as eerie, cave-like wanderings on “Sacrificial Chants of Cosmic Separation.”

Canadian and alien (hey, that rhymes), the fact A.M.S.G. marches to the beat of its own drummer makes the six cuts on Anti-Cosmic Tyranny the ultimate benefactor. While the album is a bit too bow-legged and frazzled to become black metal mainstay for the year, the obtuse stylization that comes to embody the jams are enough for a tip of the cap, and intrigue for what’s ahead.