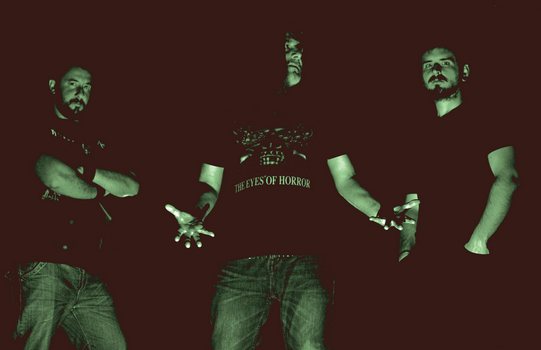 We are back to start the week in style, with a new track from one of the Greek extreme metal scene’s first bands in Death Courier. “Immune to Burial” comes from the band’s upcoming album, Necrotic Verses, and is set to be released at the end of this week on June 5th on Transcending Obscurity Records. If you dig what you hear, you can pre-order the album HERE or click the Bandcamp widget at the bottom of the page. If one track isn’t enough to convince you, feel free to use the widget to check out a few more tracks to get your blood pumping!

Of the track itself, it hits that old school death metal mark and it’s sure to wake you up from any Monday blues. Frantic riffing and thrashy tones meet death metal fury in all the right ways. It instantly hits the gas pedal and never lets up. The energy is present, and the band fires off a pretty tasty solo as the track progresses. The production is solid too – vintage enough for you to grasp the band’s long-standing heritage but still crisp enough to enjoy at maximum volume. If you dig old school death metal, it’s sure to be right up your alley. Especially if you like it fast.

Says the label:
Legendary death metal band Death Courier are one of the earliest bands from the Greek metal scene releasing a slew of demos from way back in 1987 and putting out an album and an EP in the early ’90s. More than three decades later, the band is on the verge of releasing one of the strongest albums to come from the Greek death metal scene. It’s hard to believe that this is the same band because the energy level is off the charts and everything has been amped up to match present day standards without of course changing the core sound and integrity. The music is still essentially the pulsating, rabid death/thrash metal kind and there remains that palpable hunger in the members to create memorable and gnarly music that they were known for. This is a lethal new album that throws down the gauntlet to the naysayers doubting the band’s prowess after so many years, who will invariably be forced to eat their words. Necrotic Verses will grab you by the throat and won’t let go till the shockingly potent album is over. Death Courier have set new standards for themselves and others to look up to, all over again.