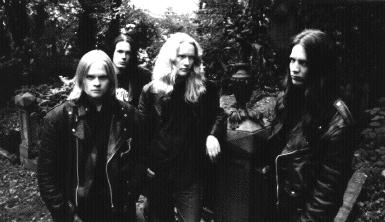 It’s a regular thought in the limited brain-space of DR’s editor to track down the remaining members of much-missed Sentenced for a recap on the band’s career. They’re certainly due for some kind of retrospective, as we’re rapidly approaching ten years in which the band has ceased to be. The sad death of all-world lead guitairst Miika Tenkula further clouds the matter, and has probably made the band reticent to speak, yet the’s band shadow still looms pretty large in the context of Finnish metal scene of today. And albums like 1995’s Amok, ’98’s Frozen, and 2002’s The Cold White Light remain virtually unmatched.

For now, the pick is “Noose,” the lead cut from the band’s 1996 album, Down. The first to feature singer Ville Laihiala, Down was when the Finns started to cement their status as suicidal metallers, with lyrical topics ranging from death….to death. No cheery topics here, obviously. But “Noose” is long considered one of the band’s standouts, perhaps their top “single,” so bask in its mid-90’s video production glow…