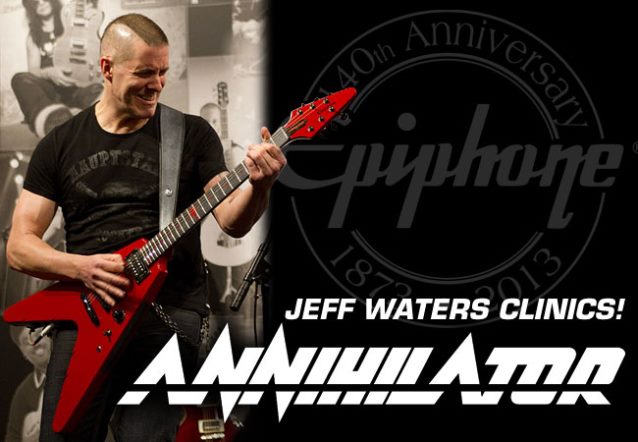 ANNIHILATOR frontman Jeff Waters’ (ANNIHILATOR) participated in a Epiphone-sponsored guitar clinic at Rockland Music in Witten, Germany on September 14. Video footage of the clinic has surfaced and may be viewed below. Feast,  ANNIHILATOR’s 14th studio album, sold roughly 800 copies in the United States in its first week of release.

When asked why ANNIHILATOR shifted its focus away from North America, Waters told us: “[ANNIHILATOR’s original record label] Roadrunner dropped everything that was metal. There were no bands left from that purge — Canadian or United States — that had the word metal in it. You had Robb Flynn from VIO-LENCE turn into MACHINE HEAD. They didn’t start off with the thrash they have been playing recently — they had red jumpsuits on and changed their sound/image. Bands lost their record deals — nobody was in a position to carry on. Most bands just got jobs, some bands adapted and got rid of their name, changed musicians and went on. For MACHINE HEAD, that worked. We said, this is what we do. We had the luck of Europe and Japan staying with these styles and still buying our music.

“We didn’t have an option in North America unless I wanted to change the name of the band and play a different form of music. ‘Set The World On Fire’ didn’t do well in North America, but it was the second-biggest album for us ever in Japan, and King Of The Kill was the biggest one there. Set The World On Fire had us headlining to 80,000 people at the Dynamo Festival in Europe, so we were going up but North America didn’t see that. I didn’t have time to tour the world and try to break back in Canada and the United States. Playing this was not the kind of music the labels wanted to sign anyway, a traditional form of heavy metal and thrash metal. Fans may have wanted it, but the industry didn’t, the clubs didn’t, the booking agents didn’t. They weren’t having it in 1993. I just decided I would vacation here and live in Canada, but do my hobby and living where people wanted me in Europe and Japan.

“My son is over 18; I can now tour wherever I want. With the Internet, it is awesome. The fans are finding us and wondering why we haven’t been releasing records in North America and touring there. They think I don’t like them, which is another misconception. If a label would sign me there, I would gladly tour, and now we got a deal through UDR Music/EMI, so there are no excuses.”

Read more from our interview with Jeff Waters here.