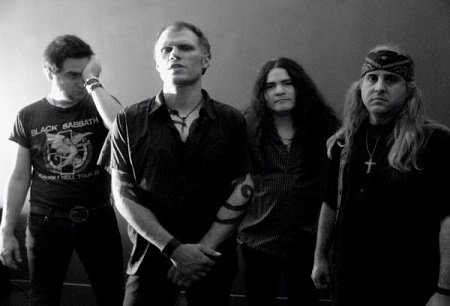 The record was recorded with Justin Weis (who produced the album with vocalist/guitarist Mike Scalzi) at Trakworx in South San Francisco from January – October 2013, and marks the band’s first new studio album since 2010’s The Animal Spirits.

Mike Scalzi elaborates on the concept behind the title track: “This song represents a last ditch effort to escape the inevitable. There will be no victory over technology – nor should there be in a broader sense – but I do fear what we are becoming. Biological evolution moves so slowly that we cannot perceive it. But social and moral evolution may come in great jolts or leaps. This can be dangerous to the preservation the species, biologically and morally/socially. But it’s also just fun to sing about ‘killing technology’ (like that other band from Canada did a long time ago). It’s a very dramatic subject. That’s why I call it “Voi-Vaudeville”.”

Scalzi discusses the cover art: “The artwork for this album was, as usual, a bit of a struggle. I had no idea how to represent an album called Digital Resistance. We finally decided that we wanted the background of KISS’ Destroyer album (a city in ruins), but instead of a rendering of our band in the forefront, I wanted the space-dog (Vargr) from Traveller. But we’d already used him, so I thought about wolves. I thought maybe a symbol (involving a wolf) representing the birth of a civilization might be appropriate. And that’s what we did… we put Romulus and Remus, the two mythological children who founded Rome, and were raised by a wolf, in front of this destroyed civilization. What does it have to do with Digital Resistance? Modern primitivism? An atavistic civilization? Nothing whatsoever? Well, I suppose only time will tell.”

SLOUGH FEG will hit the road for a few West Coast shows scheduled in March with the guys’ “sister band”, BIBLE OF THE DEVIL from Chicago. The band is hoping to do a short tour of Europe in May/June, and then hopefully to Chicago in July to do the Ale Horn Of Power Festival.