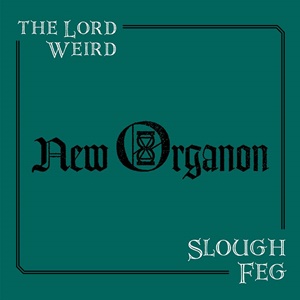 An American benchmark in the true metal scene, The Lord Weird Slough Feg aren’t content to release an album until its necessary and right in their world. So much so that for their tenth studio album New Organon, the band put five years distance between records – when earlier in their career two years was enough. Gaining drummer Jeff Griffin during 2018, the quartet waste no time in continuing their twin-guitar, culturally engaging assault, delivering ten more tales of philosophy content taken from the notes of Mike Scalzi – a college professor in his other career away from the music.

The crawling, Thin Lizzy/ “Emerald”-esque guitar melodies out of Scalzi and Angelo Tringali for the mid-tempo opener “Headhunter” gain immediate fist pumping, singalong approval – while the shorter follow-up “Discourse of Equality” possesses interesting back and forth rhythm interplay from drums to guitars and back again. Mike’s delivery contains shrill passionate mannerisms, the type where listeners hang on every word and specific enunciation. An Iron Maiden-esque galloping tempo fuels more twin guitar proclivities during “Being and Nothingness”, where one can appreciate the spirited bass lines and frantic, quick hitting drum fills. You can feel a militant march for the title track where wah-wah solos weave in and around the vocals, where the debate between science and Earth comes to life lyrically (‘The square of opposition lies/ The skepticism grows/ Into an age of sophistry’). Organic tones have always been a part of The Lord Weird Slough Feg appeal – proto-metal when it comes to production values and sonic output, letting the open space breathe and arrangements blossom based on the hooks, melodies, and harmonies. The movements are more mid-tempo or slightly slower this go around – and this scribe enjoys the exploration of that dynamic because you can be just as inviting and emotive in a slower, circular sequence for the concluding moments of “Coming of Age in the Milky Way” just as you can propelling with faster double kick speed riffs.

Add in a sparse cover sticking to a calligraphy-oriented logo, small hourglass, and odd green hue and you’ll understand The Lord Weird Slough Feg keep churning to their own drum march, dual axes directing the way. New Organon is a collection of material that doesn’t skew far from the known Slough Feg trademarks – and should appease the long-timers who’ve followed the band for decades.