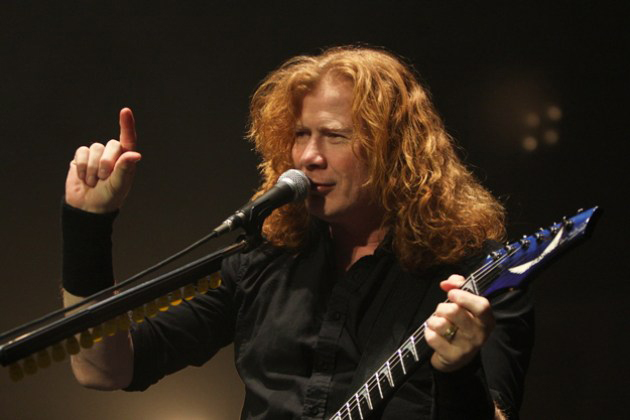 “Well, last night marked several highlights for me. We started the MEGADETH and IRON MAIDEN tour, I got to say hello to Nicko, Adrian, Bruce, Steve, and their legendary manager Rod Smallwood.

We also added ‘Tornado Of Souls’ to the set, and when we came back to our dressing room, the incredible class of I.M. was on display in the form of an enormous bowl of ice with six chilled bottles of Moet champagne. The sign said, ‘MEGADETH, welcome aboard… Here’s to a fantastic tour!! From all at IRON MAIDEN,’ so I definitely knew it was for us.

Shawn told me that I was the only other person he knows that gives Champagne to their tour guests, and I was surprised to hear that. I also introduced Shawn to Nicko and semi-arranged a golf game between them in Lost Wages, erm, I mean Las Vegas.

It was overall an amazing day backstage, and only the audience could have made it better, and they did! This was the best reception that I can recall of us playing in the Carolinas, and my memory is still pretty accurate – nothing like ‘the keeper of the facts’ David Ellefson – but still pretty good.

So here’s to a great September for all!”