Delaware/New Jersey sextet I AM HERESY have posted the lyric video for “Seven Wolves and the Daughters of the Apocalypse,” a song from their forthcoming Thy Will album. Thy Will will be released on March 4, 2014 (one day earlier internationally). The album was engineered and produced by John Ferrara at Portrait Studios, who also helmed I AM HERESY’s O Day Star, Son Of Dawn EP. The new effort was mastered by Kevin Mattesky at Phantom Center Media.

I AM HERESY singer Nathan Gray had this to say about “March Of The Black Earth”: “‘March Of Black Earth’, through symbolism and archetype, stands in defiance of the standard views of ‘good’ and ‘evil.’ It speaks of human exploration into a life without fear or reverence for imaginary deities, who are bent on suppressing our most natural desires. If those deities deem a lust for knowledge, freedom of our carnal self, and disobedience to be sinful, then let us become the best sinners we can be!”

He continued: “Each suffering character in the video represents self-sacrifice, killing what is left of our self-expression. The ominous beast in the plague mask represents each character’s individual oppression. Their freedom is personified by the archetype Belial, or Baal (‘without a master’) who represents an infernal innocence, freedom, and mockery of self-imposed slavery. Hear the call… Free yourself from the bondage of self-denial, and accept the gift of sin!” 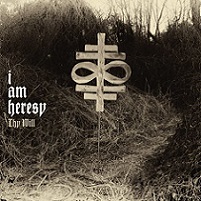