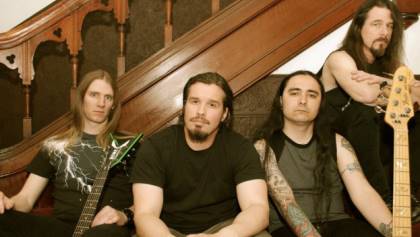 In a brand new interview with Greece’s Metal Kaoz, Bostaph was asked if he has any other projects going on besides his current full-time gig with SLAYER. “I still have my other band, BLACKGATES,” he replied. “And we’re talking about… I mean, I haven’t had any time. SLAYER is main priority, but if I have some free time, I’m gonna try to do a five- or six-song EP with BLACKGATES. We have our original singer back, Dan Nelson, so we’re really happy about that. I just need some time to get together with my guitar player, Jeremy Epp, and we’re gonna put the material together and try to get something out. We’ve put, like… Jeremy and I and Dan Nelson have put, like, over four years into the material we have, so I think we just wanna put it out there. And just move on with SLAYER. And if I can do some stuff with BLACKGATES, I will, and if I can’t, then at least we’ve put the music out there.”