CRADLE OF FILTH’s Dani Filth To Get Own Bobblehead Doll 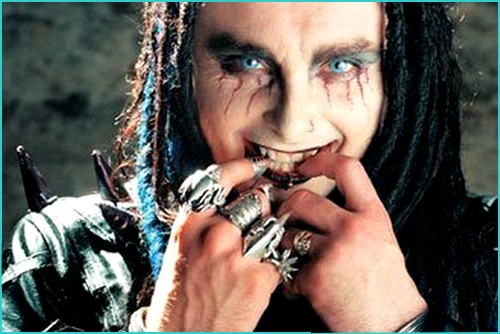 CRADLE OF FILTH mainman Dani Filth has posted an update in which he discusses the band’s recent The Manticore & Other Horrors – Extended Claws release, as well as news he will be the recipient of his own bobblehead doll.

Says Filth: “Firstly we have a slew of festival dates coming up which we are all hungry at the bit to venomously play, the first of which is Saturday next weekend at NovaRock in Austria, sharing the stage with our friends from THE 69 EYES and H.I.M.

As you might be aware of, (if you haven’t been living snail-like under a rock), our new video ‘For Your Vulgar Delectation’ is now online to view. If you’re into polished eighties horror, sexy zombie girls, with a dash of old school black metal thrown in for good measure, then you’ll love this. Directed by Ross Bolidai and filmed over two days both on location in Brian Eno’s ex-wife’s grounds and at Middlesex University film studios, London, it primarily features EKaterina Zalitko who has been an opening credits Bond Girl, features in the new Lynx effect hair styling gel advert and is now a feisty monster slayer who winds up as the enslaved undead!!!

This video is also available on iTunes as part of The Manticore & Other Horrors – Extended Claws – special needs edition. This new release also features 12 unreleased demos mixed by Kit Woolven (Dusk…and Her Embrace), plus another 3 video excursions.

Also there is just enough time to plug the half-price merchandising (see self-indulgent picture of me with my Doctor Who alien chum) on the website in time to clear some space for the Summer run of stuff, that will soon bear witness to no less than a Dani Filth Bobblehead, believe it or not! It’s chillingly hilarious! There will be, pending on the real Dani Filth having a heart attack dying of laughter, an image of the offending Bobblehead to follow for you…”

The Manticore & Other Horrors – Extended Claws is a new release and features 12 unreleased demos and another three videos.

“For Your Vulgar Delectation” video: