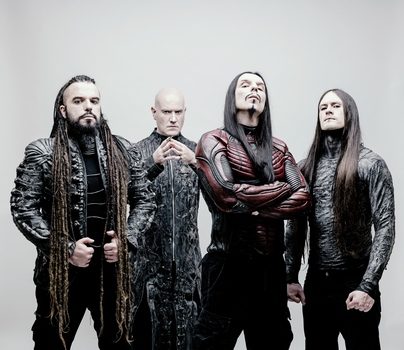 Easily one of the go-to names when it comes to symphonic death metal, Septicflesh has built a growing reputation as being able integrate orchestral elements without simply abandoning their heaviness. It’s a seemingly rare feat for the genre, and certainly is a reason for their continued rise since re-uniting back in 2007, where they began working alongside the Filmharmonic Orchestra of Prague. Septicflesh continue to take the sonic template they’ve worked with previously and expand upon it to provide an even more menacing yet beautiful vision.

It could be said, in that sense, that the band’s upcoming Codex Omega (pre-order HERE) is their strongest effort to date. Despite the orchestral arrangements, the band sounds monstrously heavy and dark – qualities that the orchestra enhances, instead of diluting. The sound of Codex Omega is massive, majestic, and sometimes terrifying. A combination that’s worth a thorough investigation. We reached out to guitarist/clean vocalist Sotiris Vayenas to bring us up to speed on all things Septicflesh – including their evolution, lyrics, artwork, and more.

Dead Rhetoric: What can you say to the band’s evolution since re-uniting back in 2007?

Sotiris Vayenas: The first thing we decided back then was to develop our symphonic side all the way, using a real orchestra instead of synths-samplers. That decision opened new ways of thinking, considering our compositions. For instance, we can start a composition with the symphonic element as a base and then try to figure out the traditional metal element. We now have more unconventional song structures than in the past. Also, the rhythm section is affected, as it is pushed towards a more progressive direction. And as we have a wide range of instruments at our disposal, we try to give the appropriate melodic line to the appropriate instrument for maximum emotional effect. So for example, ideas can start as guitar lines and end up as string lines and vice versa. But of course we never lost our death metal side. Actually, we are now heavier than ever.

Dead Rhetoric: What’s your mindset when it comes time to writing a new album? Is there an internal drive to best what you have done previously?

Vayenas: Indeed, that’s the spirit. When we start composing new material we aim to surpass our previous achievements.

Vayenas: Codex Omega is the name given to the 3rd and final bible. Omega, being the last word on the Greek alphabet, indicates finality. It is a highly antireligious and sarcastic song. As it is stated, “man invented the Devil so the Devil is man”. The other songs deal with different subjects. For example, the song “The Gospels of Fear” describes the basic emotional, mental and biochemical processes behind fear. “Dante’s Inferno” is about the actual 3rd chapter of the famous Divine Comedy. And so on…

Dead Rhetoric: “Enemy of Truth” tackles the idea of misinformation in the world today. Would you consider this to be one of our greatest threats at the moment?

Vayenas: There are always devious motives behind misinformation. For instance it can be used in order to justify one nation to wage war on another. It can be used to create fear to the markets creating economic disasters resulting to people losing jobs. It can misdirect the view of the public to mundane things, while on the background actions are taken that will affect their lives for the much worse. And these are only few examples.

Dead Rhetoric: How important is the long-running collaboration with the Filmharmonic Orchestra of Prague at this point?

Vayenas: Every note on our albums is composed by Septicflesh. And Christos [Antoniou] provides the complete music sheets for all the sections of the orchestra and supervises the whole operation. So, we do not depend on a specific orchestra and what we’re actually looking for is top performance. The Filmharmonic Orchestra of Prague, undeniably, has a lot of recording experience and our collaboration throughout the years has been great, so we keep working together.

Dead Rhetoric: Likewise, when it comes to future material would you ever consider not using orchestration or has it become synonymous with the band?

Vayenas: Our music is symphonic by nature as we like to create passages with many different music lines playing at the same time. Also it is really exciting to experiment with the specific abilities of different instruments. So I think it is appropriate for us to continue on the same path.

Dead Rhetoric: When it comes to balancing the orchestral and metal elements, what do you find works best?

Vayenas: Each song has a different structure so there isn’t one magic recipe that will work for all songs. The key is experimentation until reaching to the desired results. It is a long process, but it is important for us to have a balance between our various elements.

Dead Rhetoric: Would you consider doing a one-off or festival show with a live orchestra if given the chance?

Vayenas: It is something we would really like to do at some point.

Dead Rhetoric: Could you discuss some of the details for the cover of Codex Omega?

Vayenas: Once again it is a creation of vocalist, bass player Seth, who is also a successful visual artist. It portrays a strange figure with an elongated open womb like face, with a human embryo in the place of the brain. There are symbolic implications from various songs of the album, as “Faceless Queen”, “3rd Testament (Codex Omega)”, and “The Gospels of Fear.”

Dead Rhetoric: Does having the artwork done by the band help to ensure it’s exactly what you want to portray?

Dead Rhetoric: What do you feel separates Septicflesh from other bands at this stage in your career?

Vayenas: We have developed a unique sound and atmosphere, which is distinct and cannot be confused with another band. The result comes out from the chemistry of the band’s members, as we are all composing music and each member has a specific point of view and different influences, metal and beyond.

Dead Rhetoric: Since the band came back together, it seems that the band continues to grow and become more visible with each release. Is it rewarding to see the years of work put into the band paying off?

Vayenas: Yes. It is good to see that our hard efforts are bearing fruit and more and more people from all around the world are sharing our dark dreams and feel strong emotions when listening to our music.

Dead Rhetoric: Any touring plans? What will Septicflesh be up to for the rest of 2017?

Vayenas: There will be an extensive tour with our brothers Fleshgod Apocalypse in Latin America this October-November and various other live shows are planned to cover as much areas of the world as possible. Also we have shot 2 video clips for the songs “Martyr” and “Portrait of a Headless Man”, that will be unleashed very soon on the Internet. So keep an eye open…