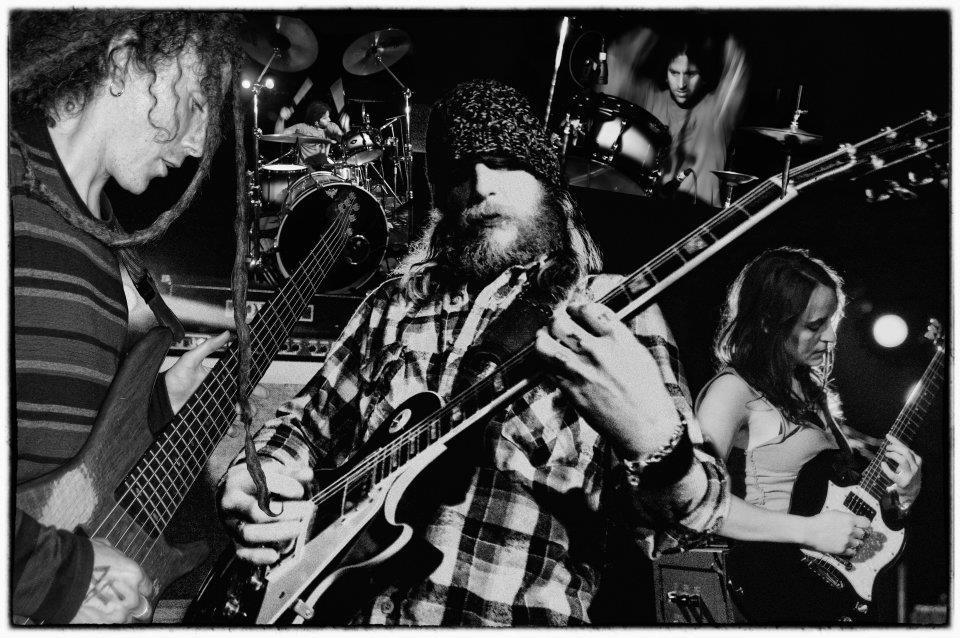 No band makes better use of one’s time in the current doom metal fray than Samothrace. As the rest of the scene continues to bog itself down and fuss over which direction to go (Stoner? Funeral? Sabbath?), Samothrace (who are from the very un-doom land of Kansas) make the decision a hell of a lot easier for all of us by providing a vista of debilitating, downright devastating melodic guitar lines. This can’t be stressed enough – the inclusion of melody in Samothrace’s sound is what makes this band and their latest album, Life’s Trade go. The four songs included are slow, lumbering, carefully cryptic jams that echo classic doom, but when those mournful, ebbing guitar lines (or “guitarmonies”) make their way through – look the fuck out.

A band that is barely four years old (and who comprise of vocalist/guitarist Bryan Spinks, bassist Dylan Desmond, drummer Joe Noel, guitarist Daniel Nokes), Samothrace is now taking Life’s Trade on the road, criss-crossing the country, wrecking minds, killing brains cells, and getting sloshy at every turn. Good for them – shit this massive deserves to be heard and augmented by beverages of the alcoholic nature, and lucky for us, Spinks was cool enough to fill Blistering in on such things and more…

Blistering.com: Not sure if you want to label the band “doom,” but this is some serious heavy and gloomy shit… and melodic. What’s the best tag for Samothrace?

Bryan Spinks: That’s a good question. When booking a tour, I simply refer to us as a doom/riff metal band. I’ve read plenty of reviews that mention the blues influence and that is definitely present in our music. 20 Buck Spin refers to us as “crushing and soulful doom from the Midwest.” Since you proposed this question, I would have to say heavy doom with intertwining guitarmonies and bluesy leads that ain’t afraid to sober up for a few minutes before getting dirty all over again.

Blistering.com: Since the album’s release in the fall of 2008, you’ve been greeted with a fair amount of good press. Are you taken back by this or are you taking it in stride?

Spinks: Definitely taken aback some on this. While we are totally stoked, it is a bit overwhelming in that we have always kept most of our previous projects vested in the DIY/underground movements, and there just isn’t a lot of “media” associated with them. Don’t get me wrong, there are/were plenty of great ‘zines out supporting the underground, just not many you see on newsstands, so to speak. That being said, the amount of reviews is what has taken me aback. I never expected the album to be reviewed so vigorously; the fact that for the most part it has been positive press is a total plus. We couldn’t be happier with how well Life’s Trade has been received thus far.

Blistering.com: What was the overall goal for Life’s Trade? It’s obviously pretty oppressive and bleak, but is there a deeper intention?

Spinks: Our overall goal on Life’s Trade was to record a solid-sounding album. Those were the four songs we’d been touring on for over a year and it was high-time to put them down onto tape. It took around a year and a half from the time Dave at 20 Buck Spin offered to put out the album to its actual release date. That was on no part his; we had touring to finish up and still needed to come up with not only the right producer/engineer but also the cash to achieve said recording. I’d almost say our overall goal was to get the damn thing done but we definitely don’t rush anything. Was there a deeper intention? No, not exactly. On Life’s Trade we aimed to record an album as heavy to the senses as to the emotions. See if we could “move people,”: as the phrase goes.

Blistering.com: You’re one of the few dark and brooding bands to weave melody into your sound like on “Cacophony,” and well, all four songs. Where do you think melody fits into the Samothrace soundscape?

Spinks: Melody is important to Samothrace. We like to use what we call “guitarmonies”: dueling harmonious guitar lines. We duel and triple layer guitar lines out of necessity for ourselves. It’s nothing new to do, therefore we try to keep it interesting. We write lines that revolve around each other, revolving guitarmonies. Even during the heavy doom feel we like to keep interplay of guitar in there. Keep it interesting for us.

Blistering.com: All four jams are quite long and extend into hazy, bleak jams. Were a lot of these improvised?

Spinks: No. We rarely improvise except for maybe some of the lead work. We did a bit in the studio, but any improvising that came out in the recording process was put to our live show. We spend a fair amount of time perfecting each song to our personal standards. We all know what Samothrace music should sound like. We generally will not let a piece see the light of day without an unanimous decision that there is little benefit left to continue composing on a given song.

Blistering.com: Sanford Parker handled production duties for the album and is gaining quite the name for himself. What was it like working with him and do you have interesting studio stories you’d like to share?

Spinks: Sanford is a good friend, so that definitely helped. He really is great at what he does. As for making a name for himself… he’s been working on that for some time. He really does have an amazing roster of bands he’s worked with. Good times? We definitely had our fair share of good times: vodka and whisk(e)y. However, we really were on a tight schedule, so there was little time outside of working. He did construct for me, temporarily, the raddest vocal booth, complete with all the accoutrements I would require to get it done. The vocal track on “Awkward Hearts” I did in one take, about one glug shy of blackout drunk. That was interesting. I really liked how it turned out, though.

Blistering.com: The album title, Life’s Trade, is it a reflection on social values?

Blistering.com: Along those lines, the lyrics seem to take on this working class stance. What are you trying to accomplish on a lyrical front?

Spinks: We’re trying to say, in as little words as possible, that it is a bleak existence, but an existence of reality. It is a necessity, apparently, to function with some degree of the set normalcy but this does not mean we cannot be educated as to the harsh realities of our interactions as humans and the consequences thereof. We are made to challenge, are we not? We can freely think and therefore should. That’s about as vague as the lyrics, I suppose. Ask me at a show.

Blistering.com: Do you foresee Samothrace as becoming regulars on the live circuit, “road-dogging it” or are live appearances spread out?

Spinks: We love to tour. Our bassist once said if one could find the perfect balance of touring and studio time for him he’d be ready to die a happy man. We started touring fairly quickly after forming and haven’t looked back. We did a nine week DIY tour in support of Life’s Trade this past fall and at the end it felt like we were just getting started. We will be hitting the road again in the states fairly soon and plan to continue this trend. Live shows are our bread and butter, so to speak. They’re very integral to our survival not only as Samothrace, but on a personal level for each of us as well.

Blistering.com: By your estimation, how does your material translate live? I would imagine it would take a certain type of crowd to digest what you’re doing…

Spinks: We seem to do alright in most crowd situations. Certainly, doom and stoner fans are into it, but we also get lots of other music fans, too. They all have something in common, though you may have to travel back to junior high/high school days to find it. Generally, those into more extreme music will get behind the music at a show but there have been a few exceptions. Also, we are all old crusties from the DIY/hardcore punk/metal communities, so some of the crust punks and hardcore kids seem to be quite fond of the music, too. People forget that Corrupted, Asunder, His Hero Is Gone, Sleep; bands like these had great strides long ago in the DIY/underground communities. By and large crust punks and metalheads got to share some killer times together … hell, we still do!

Blistering.com: Surely your geographic location has some bearing on your music. If so, how does it come into play?

Spinks: Maybe. Two of us grew up in Kansas and two of us grew up in Oklahoma. Some may say that sucks. Our original guitarist comes from New Mexico, so there may be this Prairie/Southwest influence, but I’m not sure how much it really has affected our music. We definitely have a major blues feel to some of our riffs and I am sure that comes from familial influence, but I’m not sure how affected we are in our mid-late 20’s by our surroundings than when we were, say, bored and wasted teenagers. Make sense?

Blistering.com: Where do you see Samothrace in the doom/stoner/gloom/metalgaze pantheon? Does the band even fit at all?

Spinks: We definitely play doom/stoner metal… albeit were trying it our own way. We took ideas but no stock from many influences and once the music came through our fingertips it was as thus…

Blistering.com: Have you lost count as to how many times people have asked and/or referenced the fact you have a famous black metal musician’s name in your moniker?

Spinks: Trying, too. I suppose if we had realized this back when we started we may have thought a bit differently. I don’t own any Emperor albums. I think Dylan (bass) may have one, but again that’s not really our thing. I like some “black metal” but for the most part, I do not. When I was into metal as a kid you really had to know the coolest mother-fucker on the block to even have a chance at trading tapes for some black metal albums. It just wasn’t very prevalent and certainly not readily available at any record shops in Oklahoma City, OK. So, I personally missed the mark. That is ok with me. Sorry for the confusion?

Spinks: We are slated for a possible split and a definite single LP release on 20 Buck Spin later in the year. We have also been in talks with I’m Better than Everyone Records about doing a split with our good friends from Austin, TX called The Roller. We are moving to Seattle, WA in April to change our scenery for a while. On top of that… writing and touring! 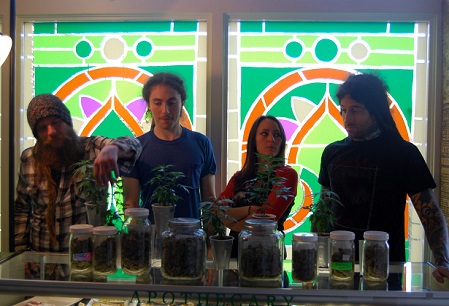 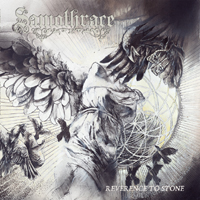 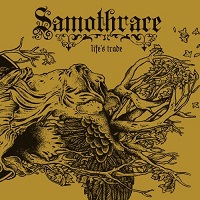