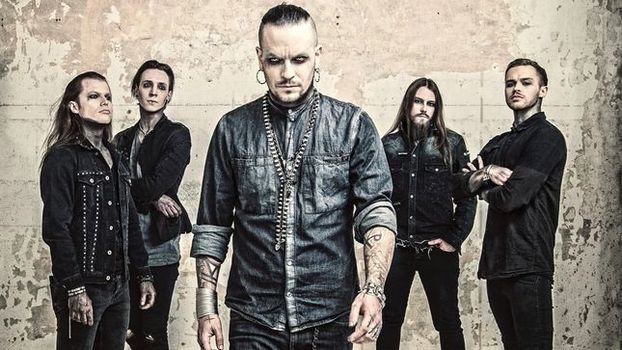 Never an act to stand idly by since their inception in 2007, Lord of the Lost have been making headway through Europe with their brand of metal/gothic/industrial music for over a decade now. Evolution through the years is to be expected, and moving into conceptual album territory, and acoustic/classical renditions of tracks aren’t out of the norm. Recently released Thornstar stands as the band’s most diverse and intriguing set of songs to date.

The integration of so many different flavors to the music keeps things fresh, and their ability to pull in hooks ensures that the listener isn’t going to forget the album any time soon. It also tells a story (see below), and in doing so, further provides compelling material for the listener. We fired off a round of questions with founder and frontman Chris Harms to get more about the album, creativity and diversity, as well as the band’s denied entrance into the US last fall.

Dead Rhetoric: How do you think the band has continued to evolve with Thornstar compared to previous releases?

Chris Harms: I might be the last person on this planet to give you an objective opinion about that. But let me try: From the beginning we always enjoyed 100% artistic freedom from our label. This did not change when we changed the label and signed with Napalm Records last year. But of course we always asked ourselves how our music would fit in the world of the major part of the people that listen to us. We always aimed for making everyone happy, both the band and the fans. This time we said “fuck everyone else’s opinion except for our own” which led to an even wider spectrum of musical and stylistic excursions. We have grown a LOT with this album. And it was the best we could do, creating the kind of music WE can be fan of, 100%. And, get an earful of this, so far the fans seem to totally love it. Could be worse, I guess!

Dead Rhetoric: Thornstar, like Empyrean, is a concept album. What can you say about the ideas that went into it, and the story it tells?

Harms: It’s hard to make this long story short but I’ll try: Thornstar is about the long forsaken high culture of the Pangaeians and their very own mythology. This mythology contains many Gods, spirits and demos. At the heart of this mythology there’s the love story between the two main Gods Morgana and Haythor. The whole story is very heartmelting and impressive. This world would be a much better place if people still believed in the things the Pangaeians used to believe in. If you wanna have an expansive good-night-story, here’s the full truth:
http://lordofthelost.de/thornstar

Dead Rhetoric: What do you like about telling stories in this manner?

Harms: If I feel connected to a story on a personal level it is a very good way to express personal emotions by using the pictures that are being created in the story. For instance all the love songs on Thornstar are, of course, related to what’s happening between Morgana and Haythor. So at first sight what you hear is me singing about someone else. But all of this feelings are or have been real to me once… So, there you go, you get a good story AND real feelings. For me it’s some kind of mask that I am able to wear when I am telling things about me.

Dead Rhetoric: You’ve been releasing a series of a documentaries called Rise of the Thornstar – do you find these type of videos help with getting the word out about the album and generating interest?

Harms: Of course, yes, but first of all I wanted to show the world how much hard work, passion and sweat is needed to produce an album like that. And I wanted to set an example about how music production should be done! I have so many colleagues that just hit some MIDI-notes with a mouse, using the same shit sound presets all over again and sell it to the world telling it’s handmade music from the heart. Of course, music is a product, our music as well, but first of all it should be music which can be sold as a product, not a product which might be seen as music.

Dead Rhetoric: One segment showed how you got some of the sounds into the album with various objects. Are you ever surprised at how something will sound when you randomly put things together?

Harms: We did not really put those things together randomly, but we put them together, yes. Well, after so many years of creative sound design I am not really surprised anymore. But I am still surprised that a hit on a cardboard is able to work as a huge snare sound. Björk once sampled everything she found in her kitchen. When I read about that I wanted to the same with everything that I find in my house that makes a cool sound. And I did. Production magic…

Dead Rhetoric: Do you feel there’s anything important about the way that you blend the more traditional band elements with electronic/industrial/synth pieces?

Harms: Well, there might be the production nerd talking, but important for me is, that everything we do electronically is created from scratch. Not just searching cool presets and using them 100% the way they are.

Dead Rhetoric: Given the wide variety of sounds and influences at hand, what do you enjoy about the creative freedom that Lord of the Lost gives you?

Harms: I certainly enjoy the creative freedom itself most. And still I love good pop songs. So I have a chance to combine my passion for songs you can sing along to with my passion for the exploration of new sound territories. Songwriting-wise I am more the Roxette-kind-of-guy; they have a sentence written in all of their album booklets: “Don’t bore us, get to the chorus”. When it comes to sound design I am more the guy that tries to follow the path that Trent Reznor once wandered.

Dead Rhetoric: The band has had a number of remixes, as well as acoustic/classical renditions of songs created. What do you like about reworking a particular song?

Harms: It’s fascinating that you can undress a song and give him new clothes but it’s still the same song. And if the song works 100% naked, with vocals and a guitar or piano only, it can wear whatever dress it wants to wear: black metal, RnB, funk, hard rock, late romantic classic, whatever…

Dead Rhetoric: You were unfortunately denied entry into the US last fall for the KMFDM tour. Do you have anything worked out for the future at this point?

Harms: Since the Mr. Orange holds the throne, many many many bands from “the old world” were denied. We won’t try again as long as the trumped up truth is out there. We lost shitloads of money because of this. We can’t afford this a second time.

Dead Rhetoric: Are there any parts of the world that Lord of the Lost has not played yet that you would love to get to?

Harms: All continents except for Europe, and the US in 2014, are still unlorded. This needs to be changed.

Dead Rhetoric: What’s next for Lord of the Lost following the release of Thornstar? 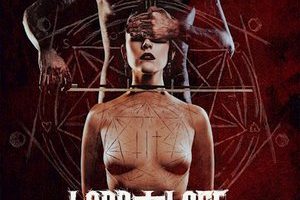 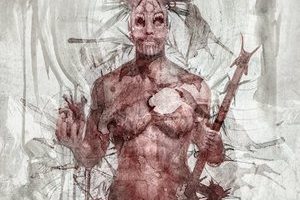