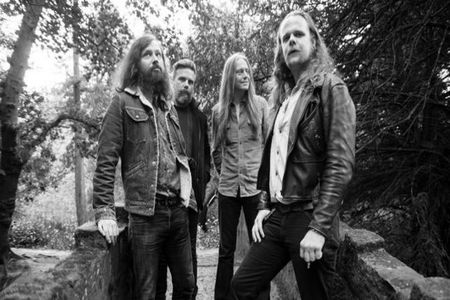 Already establishing themselves in the riff/ heavy rock genre, the UK’s Gentlemans Pistols probably received a decent uplift in consumer/ media coverage following the recruitment of Carcass’ Bill Steer on second guitar in 2009. Considering the hefty interest in newer bands willing to dig from the 60’s/70’s well and make their own take in 2015, what can separate the contenders from the leaders is a matter of sincerity and honesty. Gentlemans Pistols are the real deal: purity of attitude and sound, mixing things up with twin guitar harmonies and arrangements that run the gamut from straight ahead heaviness to reflective ballads.

Hustler’s Row is their third album, and another cracker to be a bit British in terms of the entertainment value present. Chance are if you love early NWOBHM, Thin Lizzy, and other 60’s/70’s influences, this quartet will meet your approval. Here is a quick hitting chat through Skype with Mr. Bill Steer himself, where the conversation rolled through his initial fan status to joining the group, the boost to Nuclear Blast from their Rise Above beginnings, and what makes the band stick out in a throwback happy scene. Plus a small update on Carcass’ follow up… because we would be remiss if we didn’t touch upon this extreme metal mainstay.

Dead Rhetoric: You joined Gentlemans Pistols in 2009, what intrigued you most about joining these musicians?

Bill Steer: It was many things, because we had been friends for a few years already. For a time I had a band called Firebird and we used to tour with Gentlemans Pistols, so we were already friends and we had similar tastes in music. The other thing was I was just a fan, one of their early times I saw them when they came to London and I really enjoyed it. In my mind it was one of the only bands doing that style in this country that was very sincere and not really about fakery I guess.

Dead Rhetoric: How do you feel about your first effort with the band, 2011’s At Her Majesty’s Pleasure?

Steer: That was a fun record to do. There’s numerous parallels with the record that’s coming out now the third album because you’ve got three-quarters of the same lineup in the band, and exactly the same recording situation because it’s the same little studio in Bradford where guitarist/vocalist James Atkinson regularly records bands, that’s his day job. Those are the similarities… that was a great one to do, I learned a lot from going in there to record my guitar parts. Whenever you play lead for a band it’s always a little bit different, you have to modify what you do to fit the group, without analyzing it too much. I went in there with absolutely nothing pre-planned, just blasted some stuff through and we kept the bits we liked and re-did the bits we didn’t. It was very similar to this record, although I think this time we were even more critical.

Dead Rhetoric: At what point did Gentlemans Pistols make the move up from Rise Above to Nuclear Blast? Did everything take place behind the scenes in the four years between albums?

Steer: Hmm… I’m trying to think. There was definitely some interest from Nuclear Blast some time ago, but I’d say the deal only really came together in the last year or so. It took a while to sort that one out, around the same time James was mixing the album. The recording part was very quick, but he just wanted to frame it in the right way. There were a number of months that went by where we were listening to the mixes and getting used to those. Simultaneously there was discussion with the label, it just seemed like the right thing to do because we definitely had a good run and relationship with Rise Above. It was evident it wasn’t really going to work because there audience is more into doom, occult rock or stoner rock, and Gentlemans Pistols doesn’t really fit in to that demographic. They were keen and hungry to push the band, so we felt this was the right thing to do naturally.

Dead Rhetoric: Hustler’s Row is the third album – what can you tell us about the development of the band from a recording and songwriting perspective. How have the new members integrated into the framework of Gentlemans Pistols?

Steer: I can say this still as a fan really – I haven’t written for the band, I purely play lead guitar. I love how James writes. What you see with this record is him spreading his wings a little bit. There is more variation on this album stylistically- there are a couple of tunes that you could describe as ballads, and there are definitely a couple of tunes that could be described as rockers. A little bit more restrained and catchy. Then there is material that is more the riff rock that you are used to from the first two records. From a listeners perspective I think this is the best Gentlemans record- but naturally I would want to say that. I enjoy playing in the group.

Dead Rhetoric: Where do you see role within Gentlemans Pistols? I’ve heard in previous interviews that you’ve talked about this being vocalist/guitarist James Atkinson’s baby, but do you work with him on some of the songwriting or guitar harmonies within tracks like “The Searcher”, “Devil’s Advocate On Call” and “Private Rendezvous”?

Steer: Yeah. Out of all the bands I’ve been, this has been in many ways the most organic. Things don’t tend to be discussed at length, you just play and feel it. It’s very obvious if something isn’t working and you just tackle it head on when that comes up. We’ve been fortunate in the sense that James and myself when we play rhythm guitar together it seems to gel. We are not discussing whether someone is doing an upstroke or a down stroke or how you pick this or that, it’s based in a very spontaneous, feel basis. It seems to work thus far.

With the harmony stuff, we sort of get together and let it happen in the rehearsal room. Probably the most evolved bit was doing the lead break in “Devil’s Advocate On Call”. I started doing that solo as kind of a slide thing and then the next day we went back into the studio to listen to it and we agreed it wasn’t very happening. So then I re-did it as just a regular lead part, but I knew instantly it had to be harmonized, just to be more kind of thematic. Between the pair of us we bounced ideas across the room until it took however long it would take to record that solo. What we ended up with was fun, it’s a harmony but more like a true harmony. It’s not static where someone plays the same line one-third or one-fifth above the previous one, it’s weaving in and out in different directions. We got a buzz of that, I’m hoping that people will hear it that way too.

Dead Rhetoric: I noticed a little tip of the cap in the main riff to the title track as similar to “Revelations” from Iron Maiden – does James have a love for these UK forefathers in addition to his 60’s and 70’s influences?

Steer: Oh for sure. He’s definitely a fan of the New Wave of British Heavy Metal stuff. I think it’s safe to say, you are probably right in that there’s a spread of influences that can be traced back to the late 60’s and go on through to the early 80’s. It may not be touched about in many interviews but it’s evident that James comes from a background of playing aggressive, hardcore punk music as a youngster, and so does Stu the drummer. I just think that energy is actually still a part of the band’s sound to this day. Some people think they are just hearing 1970’s music but I believe that if you played us back to back with some of our favorite bands, say Hard Stuff or The Swedes, it’s evident that there a completely different set of dynamics. It’s 2015, you can’t really escape that. 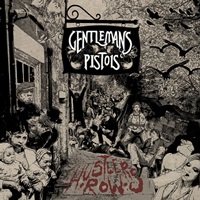