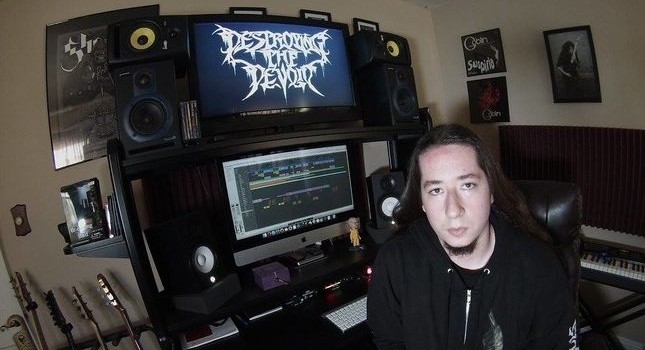 Being a part of the death metal scene for quite some time, between Arkaik and Deeds of Flesh, most know of Craig Peters for a certain level of extremity in his music. So when the time came to work on some material on his own, the time was right to expand some boundaries and try plenty of new things. Destroying the Devoid is Peters’ own project, and on his first release, Paramnesia, one might just be surprised at the number of influences and nuances that have made the cut, if you were to solely judge things based on previous efforts.

Paramnesia is full of strong cinematic overtones, with sometimes eerie synths in the mix, along with a number of progressive and melodic structures. It’s the type of album that you can listen to repeatedly and hear new things, but at the same time, it will hook you from the start. Given the chance to chat with Peters one evening, we went through how the idea for the band came about, the cinematic qualities it has, as well as how it differs from his work with other bands. We even got an update about the next Deeds of Flesh album.

Dead Rhetoric: The album came out last Friday, how has the reception to it been so far?

Craig Peters: So far it’s been going pretty good. I’ve been seeing a lot of good reviews, which is pretty nice. It’s a cool thing being that it’s so relatively new to a lot of people. Most people are probably familiar with me being in Deeds of Flesh and Arkaik, so some people might be like, “what is this?” Or if they see it, they may not know what it is. But for the people who have actually heard it, the reception has been pretty cool. Nothing huge – no big explosion or anything, but for the people who have been saying stuff, it’s been really nice. Your review was pretty cool – it’s cool to see that certain people are paying attention to certain things in the music that I was hoping would come across.

Dead Rhetoric: Where did the inspiration to do Destroying the Devoid come from?

Peters: Pretty much just out of having a lot of music ideas that I felt I couldn’t do in some of the other bands I was in. When you are in a band and you have put out a couple albums, there’s an expectation of what people think you should sound like. Some bands can get away with [evolving], like Gorod, which is the first band I can think of that was more of technical death metal edge of it, and then they started expanding their sound. Using certain vocals or going into flamenco-fusion sort of thing, or crazy-heavy technical riffage.

I started getting more experimental with my riff writing around the time that I was writing [Arkaik’s] Metamorphignition. There were certain riffs that I wrote that I thought, “I can’t use that.” There were too melodic or that sort of thing. So I thought it would be cool to just write, and not worry about it. I also had people who asked if I was ever going to do a solo album. I think most people usually think instrumental album when they say that – just guitar solos and that sort of thing. But while I was writing, maybe from being in a more band-environment, I felt they were songs that would have vocals over them. So I started wondering if I should have other people play on it. But I said, you know what, I’m going to try and challenge myself and do it all on my own. I went out and bought a bass and recorded all the bass parts. As a default, I could play bass from playing guitar, but I still had to practice it to make it sound good. I did vocals back in old bands, but I was never a lyricist or a full-on vocalist, so I wasn’t sure how people would take to that. But I decided to go for it.

The whole album is basically me doing whatever I want. Not having to ask if something was okay or get shot down. If I shoot it down, it got scratched. It was really freeing to do that, and fun creatively – not having to worry about someone else. I could go as far into something I wanted. Even introducing clean vocals. No band I’ve been in has had clean vocals. I felt some people would feel like it’s just another band trying to do clean vocals, but I never intended to do it. It was just a natural thing – I could hear a vocal melody in my head and I thought, well I’m not a singer but I’ll work on it and practice it or give it a shot.

Dead Rhetoric: There’s a cinematic feel through much of the album. Was this meant to be one of the key ideas that Destroying the Devoid hones in on, sonically?

Peters: I think it was definitely a prior thought. I have always been into film score music. I just love how people can tie-in the music, cinematically. When you have a movie, you have a visual. When you are just doing music, how do you create that atmosphere? That was something I wanted to dive deep into. Sometimes when you are in a band, you can’t do that – if you have a minute of atmosphere people are going to get bored. So you almost have to write for the live [setting]. So the fact that I was doing this record – I never really planned about doing it live. I just wanted to write the music first. How it would go over live was an afterthought. I wanted to focus on the music and how long I wanted the orchestral parts to go, or the ambient, mellow parts. I definitely wanted a cinematic vibe to it. I wanted the listener to be able to hear it and forget that they are listening to an album, and just be in it.

Dead Rhetoric: Does that kind of tie into the three part closer “Beyond the Dark Veil,” in terms of being in the moment and going with it?

Peters: Those three songs – that was when I really started approaching it more cinematically. A lot of the other songs definitely have it, but with those being a mini-concept…there’s this book called Beyond the Dark Veil, and it’s about post-mortem photography – where people would take pictures with their loved ones that are deceased as a way of remembering them. I told my girlfriend it sounded like a cool song idea and she told me to go for it.

So I wanted to take that concept and almost score the idea of it with music. So Part I, “The Co-Existing Gaze,” is from the perspective of someone who just lost someone. Its super depressing, and I wanted the feeling of someone sitting alone with their hands in their face, emotional over the fact that someone they loved has died. Part II, “Into the Darkness Beyond,” changes perspective from the person who is mourning to the person that has died. They are transitioning into the afterlife and being guided by these angels into “the big end” sort of thing. So that song starts off more dark and gets more intense. So the last part, “Beneath the Boughs,” is pretty much being at a funeral and coming to terms with the fact that they have lost someone. It’s again from the person who is mourning, and the feeling is that it’s done, and there’s nothing you can do about it – that sort of thing. If you read the lyrics, it has a very emotional vibe to it, it’s not brutal at all [laughs]. It’s feeing cold and helpless, and what do you do? In the end, eventually people die…they are dead and buried and that’s it.

It was fun doing that song because it is a concept that leaves these ideas for new musical ground – when you just write music sometimes you can just write a certain thing. When you have a concept, it can take you to new areas musically.

Dead Rhetoric: How does the album title, Paramnesia, tie-in to what the album is all about?

Peters: A lot of the songs deal with what is really going on versus what people think is going on. I’ve always been really fascinated by the idea of perception. How three different people can see something differently – if you show someone a paper with a color on it some say it’s yellow or they say it’s orange. Something simple like that. But it’s also interesting how people see themselves. The idea of the album cover is that someone who is completely fine is looking into the mirror and seeing this horrid thing that they think they see. It’s bleak and very sad. Some people have insecurities in how they feel. “Chasm of Existence” is sort of about the gap in humanity – some people get caught up in their own BS and they don’t really look at what’s going on and they are kind of a mess.

A lot of it deals with perception…”Carnivale Nocturno” uses the metaphor of the carnival being like the media. They throw up all these things to make you feel worse when everyone already feels bad about themselves. Its like “oh hey, this is what you should look like.” Or you need this type of car to be considered successful – there’s always something that you need. When you go to a carnival and you see all the fun houses and there are all those crazy mirrors that make you look different from how you actually look. That’s not everyone, but with reality TV and being so caught up in the digital era, some people don’t stop to look outside and look at the trees. They just get in their car, go into a box. Come home, turn on another box – they don’t really see what is going on sometimes. That’s where some of the inspiration comes from, in terms of human perception and how people feel about themselves. 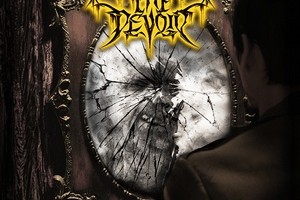