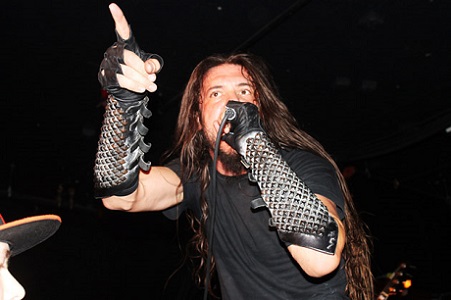 The second part of Bridget Erickson’s in-depth interview with Goatwhore frontman Ben Falgoust, topics ranged from the man’s near-fatal car accident, to the band’s lyrics, and, Satan, of course. Read on…

Dead Rhetoric: So, several years ago, you suffered the car-crash that left you paralyzed for some time. How are you feeling strength-wise these days?

Falgoust: Yeah, that was like, ten years ago… I think it’s really good now, I just worked really hard when the situation happened. It was just bad luck, it was all timing and stuff like that. But the only thing you can do at that point is persevere and move forward and do what you can. You know, you were dealt a bad card. When I was in the hospital, I remember I was in a wheel-chair for like a year, and I was going into this hospital in New Orleans and I didn’t have any money, so it was kind of like a hospital for people with low funds. I remember being next to people and seeing some of the situations they were in. I kept thinking, you know, both my legs were broken, I tore my heel. But this guy, his face was sewn up or something and he couldn’t talk, he had to write everything down on paper. And some dude was there who got shot the hip, and his whole hip fractured and broke up in little pieces. When you’re in those situations, you start to see a lot. There’ll be people thinking, “oh pity on me, I’m in this situation,” but I was like, look at this shit these other people are dealing with. You know, I need to get through this and I just need to sort it out. I had a lot of good friends and my family was really close and helpful, so that was a beneficial thing too.

Dead Rhetoric: That’s good, I’m glad you got through it. This next question is sort of related – there is a lot of death and decay in Goatwhore’s lyrics, what are your perspectives on these topics?

Falgoust: Death – a lot of that came from the whole accident thing, because it was really close. So, I got smashed in the front of a van and I lost a lot of blood. I just remember pieces until the point of everything, like when I started being able to get more of the surgeries, I went through nine surgeries or something like that. I don’t necessarily want to say I became infatuated with death, but I guess I confronted it in a certain sense and then I just was comfortable with it. So then it started to evolve into the lyrics and everything. It’s not like some kind of cool thing, like “argh! Death! It’s so-” No, it is its own element. I started reading things about death, how there’s different cultures that worship death, in various ways, too, from leftist ideas to rightist ideas. Like Santa Muerte in South America and stuff like that, it’s amazing how they perceive death as a god more so than like “God” or “Jesus” or whoever, whatever, another culture believes in, they believe death is the highest and the mightiest of all because he is the reaper of all, he has the ability to end life and end existence. I was really interested in it, I still am.

I still read a lot of variations on it because it’s really interesting. I’m comfortable to say I’m comfortable with it. I guess when it happens, I’m pretty much expecting of it. I don’t want people to grieve over my death, I just want them to embrace what’s going on and just be satisfied with what they are. If I die, cremate me and purchase a keg, and then everybody have a party or something. Don’t have everybody around crying and stuff! But I mean, it’s different, it’s different for everybody. If I lost somebody, it’d definitely be a touching thing. I’d like to say, Mr. Brockie from GWAR, that’s a really touching thing. Not only for us, but for so many other bands that knew him. Him and all the people of GWAR are just incredible individuals. Him disappearing from the scene is just a complete loss, and you’re just like, shit. It touches you in certain ways. That’s what some people say, “argh! Well you’re supposed to be all into death and everything!” And it’s like, no, not when you have people close that you know and they do that. Not only that, not just that they’re close, but it kinda sets this idea in your life. Like, that was a band that you toured with and they were like mentors in a way because you saw things that they did that helped you when you toured. There are so many variations of it, but that’s the basis of it pretty much.

Falgoust: It’s different books and stuff, whether they are fictional or nonfictional, even horror movie type stuff, old horror books, H.P. Lovecraft stuff, there are lot of different variations I kinda pull from. Even if you go and read biblical stuff and you look up different things, even in biblical stuff, there are so many variations of the story that it just gets out of control. Then it just spawns your other ideas because if you read other aspects of it, even like H.P. Lovecraft or something and you intertwine it with a biblical contradiction, you’ll have your own ideas and everything.

You basically get to see how religions kinda start because anybody can start it if they have a lot of knowledge and if they can get people drawn in and bring it, they can create their own idea and they evolve their idea. So, you can pretty much make up anything you want and evolve it. If you’re powerful enough, you can get people to follow that concept. I have no structure I follow. I’m more about a self-person, not selfish, but I definitely focus on my life and the people around me, and that’s how I move forward with things.