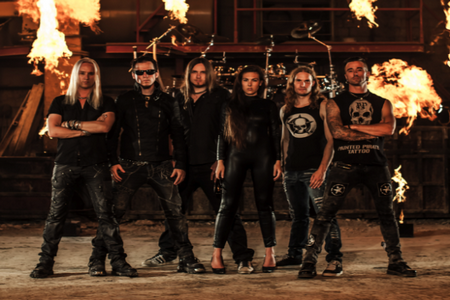 Building up a North American fanbase is never easy, particularly for bands where the country isn’t your native land. It requires an almost constant touring to gain any sort of momentum or traction, which isn’t always the most feasible route for bands. But one band that is certainly trying to make that push is Sweden’s Amaranthe. With their cross-over potential, they could just be the band to do it. After a successful run last fall as direct support for Within Temptation, the band returned quickly for a proper headline tour this spring.

With the band’s latest effort, 2014’s Massive Addictive, being their strongest yet (not to mention their strongest in sales), it seems the perfect time for the band to try to break through on this side of the Atlantic. Before the band’s set in Worcester, MA, I was able to sit down and chat with vocalist Elize Ryd and guitarist Olof Mörck, who were both in great spirits and quite happy to be back touring the US. Read on for some discussion of how the band writes ballads, how the band deals with downtime on tour, and even some ghostly happenings within the Worcester Palladium.

Dead Rhetoric: Henrik had to sit this one out due to impending fatherhood. How’d you lock in Olle Ekman and how’s it been going with him so far?

Olof Mörck: It’s been going great. He toured with us with his other band, Deals Death, when we did a European tour in April of last year. He’s a great guy and we saw him perform every night on stage and he did a great job. When we started to look for temporary replacements, to have someone that we have already shared a bus with was a good idea. You can really like someone and they can be very talented performers, but you have to spend a month with them on a tour bus and there might be a different issue. We asked him and he was super excited about it and it’s been working out great so far.

Dead Rhetoric: The video for “Digital World” is a bit less theatrical than most of your videos. What was the vibe you were going for with this one?

Elize Ryd: I think that was definitely what we wanted for this video. We always have all these movie-ish themes. This is also movie-ish, but a different movie.

Mörck: It’s The Island instead of The Rock.

Ryd: Exactly. It’s still theatrical, maybe from my side. But it was actually a challenge to just be filmed standing completely still with a camera up close and in your face. All of my scenes were like that. It was my idea to do the video in the style that we took the photos for the album. It was so cool and very futuristic. The rest of the band liked the idea and that’s how it ended up. For a change, I think it was nice to do something like that. The next video will probably be more action again.

Ryd: I’m going to start choreography tomorrow [laughs]. We actually don’t know what the next video will be.

Dead Rhetoric: Do you get a say in that or is it more what Spinefarm is looking at?

Mörck: Absolutely. Of course [Spinefarm] will have an opinion, especially when it’s the first single, because that’s super sensitive. We had some sort of idea about it when we went into the studio, but the label was super certain about “Drop Dead Cynical.” We had been talking about some other options, but the main guy at Spinefarm, who worked at Roadrunner for like 14 years, he picked the singles for Slipknot and Nickelback and stuff like that. So we figured if he thought we had a hit, he probably knows what he’s talking about. But it’s probably one of my two favorites of the album [“Drop Dead Cynical”], and the other one would probably be “Digital World.” We didn’t have that much discussion about which was going to be the second single.

Mörck: It would be strange to release “Trinity” again, but maybe one of the ballad-y tracks will be next, I don’t know. Maybe not.

Ryd: No! I think “Unreal” would be cool. I could do cheerleading and we could do a Super Bowl-like thing. I like a lot of sports.

Dead Rhetoric: Speaking of ballads, you have at least one or two on an album. What does it take to make a good ballad?

Ryd: 100% emotions. To write a sleazy, sneaky ballad – it doesn’t mean anything. It’s like bullshit to me.

Mörck: Ballads are the easiest thing to really get wrong. It really needs to come through the heart.

Ryd: If it’s not honest, it shines through. That’s why I love ballads like “Wicked Game,” or some of Bon Jovi’s [ballads].

Mörck: Like “Always,” or “Bed of Roses” – it’s cheesy but there are real emotions there.

Ryd: If I’m feeling very emotional, it’s very easy to write a ballad and not an uptempo song. If you are happy, you’re probably going and hanging out with your friends. Of course, we catch that feeling and make music out of it when we hang out. Usually, when you are alone and you don’t have your co-writer nearby and you need to get those emotions out, it becomes a ballad. That’s why I only write ballads when I’m alone. They are very personal. I think it’s hard to force a ballad. If we don’t have anything to write about or have these emotions, it’s very hard.

Mörck: I agree. I don’t think it’s ever happened where we have been sitting down and saying “now we should write a ballad.” It’s always happened rather spontaneously. That’s definitely true, both with “True” and “Over and Done.” The “Over and Done” chorus was a chord progression that I had for a long time, and some lyrics that were in the back of my mind for quite a while. It took a long time to actually sit down and finish the whole thing, because you need to be in the right state of mind for it.

Dead Rhetoric: Have you placed North America as a priority to breakthrough in terms of headlining, given the success you’ve had everywhere else?

Ryd: Absolutely. We want to be here, we want to move here. There’s something about Sweden and the US – we have a strong connection. I actually have relatives over here who had immigrated. Sweden is very Americanized. Every musician wants to move to LA, especially rock stars. But that’s a big dream. To be able to do that, we need to get a huge success here. We do really appreciate this market, and we are hoping that things will stay as good [as they are] and that we will be able to grow here. We definitely have that focus in mind, that’s why we come here so often [laughs].

Mörck: The interesting thing is that the whole big push for the US is happening for us. Of course, it’s really something that we want, but American radio has picked up our songs and played them to death. We have a really great booker here in the US, who has believed in us since our first record. Back then, he couldn’t do anything but now he’s booking larger and larger shows. Also, the record company, Spinefarm/Universal, here in the US they have been pushing us a lot in terms of promotion and visibility. We are in the beginning of our career here in the States, it’s already happening, being able to headline a place like this [Worcester Palladium], which is a powerful thing. The US has grown into one of our main markets if you look at album sales, so we are really excited about that.

Dead Rhetoric: Have you been able to do any sightseeing here in the States; any landmarks that you haven’t been able to see that you are looking forward to seeing?

Ryd: Personally, I have a done a number of tours with another band [Kamelot] here in the US so I have done lots of sightseeing. I really like going up to the Ohio area. But we love New York, and the bigger cities as well. It feels so unfair, as I’ve been around and seen a lot but the rest of the band hasn’t.

Mörck: Oh yes, I’ve seen a lot because I always go out and sightsee. We’ve done two tours now in the US and there’s been a lot of very cool things I’ve seen. I have this great memory from the last time we played here [in Worcester], with Within Temptation. We were staying in a hotel overnight, so the day after that we were driving to New York and it was in October so you had this amazing Massachusetts fall. All of these different colors reflecting into the lakes and things. I get goosebumps just thinking about it. We’ve done some tourist-y things, like going up into the Empire State Building.

Ryd: The first tour, we had a van and the driver was so nice. We would ask him to go to places like Niagara Falls and the Grand Canyon and he would drive us there. So that tour we saw the most.

Mörck: Usually, if there is time for it, I make sure to really see the city that we are in. So when we were playing in Philadelphia last time, we walked through from one end to the other. We did that a lot on the last tour, and I’m hoping for us to do that again. We were taking a water taxi around the harbor in Baltimore yesterday. It was cute.

Ryd: Today, I just went up the street to the left. Usually I just go down there to that place [in the other direction]. I’ve probably missed a lot of things. The first tours I did with Kamelot, supporting Nightwish, I was always in the front of the bus. Due to jet lag, I woke up at like 6 in the morning every day, so I saw the sunrise every day on the road. I was also so excited to be here, so I could not sleep because of that either. It was like “Bing! I have to [wake up and] check things out.” That calms down the more you tour. Now I’m more relaxed [on the road].