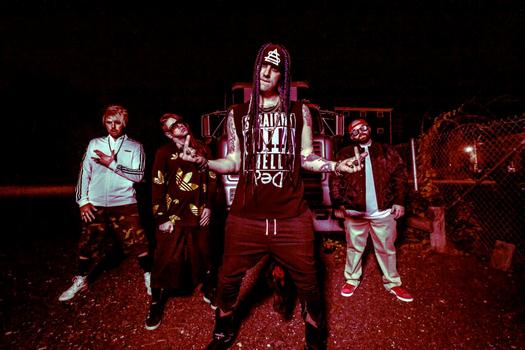 After staying in the shadows of other bands, eventually the duo of Johnny Skulls and Dax Dabs decided it was time to do their own thing. Forming Above Snakes to fuel their own creative desires, and fleeing Los Angeles and returning to their home in Boston, the act has just begun their own journey. They most recently put out their third single, “I Feel Bad,” and are currently at work in the studio to bring fans even more new material. We caught up with both members just prior to their return to the studio to discuss their latest single, upcoming studio time, and to get to know a bit more about Above Snakes itself.

Dead Rhetoric: What lead to the formation of Above Snakes and how do you describe the band itself?

Johnny Skulls: It started as an idea that Dax and I had because we were sick of playing for other people. I was a drummer before, and Dax has played various instruments – he can play anything, but that was how we met, playing in bands together way back when. We were both living together out in LA and playing with different people and we were both getting fed up with it. It wasn’t fun anymore. We asked ourselves what we were doing – this was the thing we loved and we can’t stand it. So we went back to our roots and wrote some music and decided to give this a shot for ourselves. So we moved back to Boston from LA since we were both from here. So we wrote some new music and launched the band during the pandemic [laughs].

Dead Rhetoric: As you just said, have you encountered any problems in launching a band in the middle of a pandemic?

Johnny Skulls: It’s definitely strange, and not ideal. We want to be out there playing for sure, because that’s number one. But all things considered, its doing pretty good and people seem to be responsive. We are stoked to move forward and hopefully get everything back to normal so we can get out there and get in front of people.

Dead Rhetoric: As you were saying you both played in bands with other people, what was your takeaway from working out in LA?

Johnny Skulls: You realize the value in being able to work with someone that you can get along with and see eye-to-eye with. I feel like a lot of the time, I have been in bands where everyone is trying to get their opinions in and is clashing and butting heads. Too many cooks in the kitchen, you know? So when you find a person that you can lock in with and work well together, you have to stick with them and make great shit happen!

Dead Rhetoric: Your latest single “I Feel Bad” just came out recently, what can you say about it specifically?

Johnny Skulls: It just came out and it was premiered on Knotfest.com. It’s kind of me talking to myself and questioning if I can succeed through the eyes of my new self. Can I be the person that I want to be and need to be, without getting sucked into the dark vices of my past? It’s a story about where I was for a long time.

Dead Rhetoric: Do you feel that “I Feel Bad,” “Never Alone,” and “Adrenaline” are a good representation of what to expect from Above Snakes?

Dax Dabs: I definitely think so. We have a little heavy, a little poppy. We are both huge pop heads, and we grew up on it, and we are mixing it in with the nu metal stuff. We like to call it nu era. The newer stuff we have coming out, we are actually heading back into the studio on Monday with Kile Odell, the same guy we worked with on the last few tracks, and we are going for an even heavier yet catchy sound. We are stoked for this new stuff.

Dead Rhetoric: You will be going into the studio to record your studio album in March. What are your thoughts going into it?

Johnny Skulls: We just want to take the music to the next level that we see that we are going. We are just excited to get more music out. People are going, “We want more music!” We want to give it to them as soon as possible. Whether that’s an EP or a full-length, we will figure that out. We are going to write a bunch of songs and see where that gets us. But new music is coming ASAP.

Dead Rhetoric: In forming the band in the pandemic, it has allowed people to listen to music more. So when you put a few songs out there now, everyone is like, “We need more now!”

Johnny Skulls: [Laughs] Yeah, it’s crazy! We are finishing up demos right now and packing out bags and then we head out tonight to drive to Nashville.

Dead Rhetoric: What can people expect from your next release?

Dead Rhetoric: I like that you are more open about the catchy part. It seems to be a problem in heavier music where people shy away from it, because they are afraid of things not being heavy enough.

Johnny Skulls: That’s why we were stoked to release “I Feel Bad.” It’s kind of different from the first two. It’s more laid back and ballad-y, but at the same time it’s still pretty heavy. It has that darkness to it and that heavy vibe. That’s what we are all about. We like to ride that line. Like Dax said, we are definitely pop people and we draw from a lot of different influences across the board.

Dead Rhetoric: You are described as a DIY type of band – how important is complete creative control this early on in the band’s life?

Johnny Skulls: Yes, 100%! That’s what this is, to a tee. It’s a vision that we see and we don’t want it compromised by anyone.

Dax Dabs: We will just keep doing it ourselves until the rest of the world sees that same vision.

Dead Rhetoric: With that DIY piece, you do your own set designs too. What goes into that aspect for your videos?

Dax Dabs: Honestly we will just sit and chat it up first, Johnny and I. Johnny is really good with his hands and has a lot of experience with woodworking and shit.

Johnny Skulls: We have this big woodworking space at our disposal, which we are lucky to have. So there’s this space, so we built these sixteen foot walls out of foam and painted them. Then we texturized them and picked up some furniture off the side of the road and Facebook marketplace and put it all together. What we see in our heads, we want to bring it out so people can see what we see.

Dead Rhetoric: Doing it that way, you are saving some money too.

Johnny Skulls: That’s the thing, how do you portray the vision that we have with the little budget that we have? It’s always difficult. But we are giving it our all.

Dead Rhetoric: What do you feel sets you apart as a band?

Johnny Skulls: Yeah, we want to do what we want to do. I feel like a lot of people are cautious and nervous, especially now with the way things are. We just want to be ourselves and rock out [laughs].

Dead Rhetoric: Do you have any short or longer term goals for Above Snakes right now?

Dax Dabs: Just getting out when shows get back. Trying to get onto some of the festivals and hitting the road with touring. Hopefully it’s all back to normal soon.

Dead Rhetoric: You are heading into the studio now, do you have any other concrete plans for the rest of the year?

Johnny Skulls: No, just that as of right now. But we should have new music to you by the springtime or summer. We are just stoked for everyone to hear that.