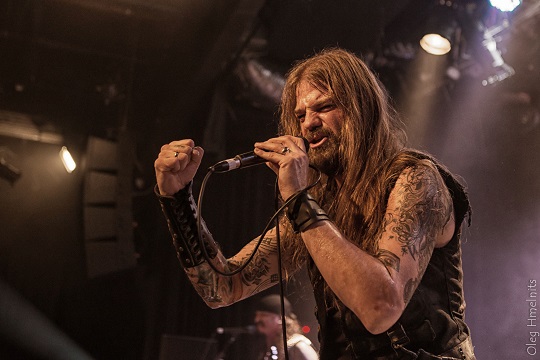 An annual tradition in Worcester, MA,  the three day New England Metal and Hardcore Festival pours through in mid-April, typically before Patriots Day. The 16th installment took place on April 17-19, consisting of a non-stop mix of bands running on both the smaller upstairs venue (capacity around 400), and the bigger downstairs venue (capacity in the 1,500-2,000 range).

One of the nice aspects about the festival is that once you get in, as long as you keep your ticket portion and have a wristband on your left arm, you can come and go as you please. Taking advantage of this to dump merchandise bought (and let me tell you, between the normal band merch and vendors in the upstairs portion, you could dump your whole weekly paycheck if not careful) and get a breather every now and then is luxury and for some a necessity.

Unable to attend day one and two due to a hectic work schedule, I knew I wanted to take in Saturday’s festivities. The late afternoon to evening portion featured a non-stop power packed lineup of bands that I had never seen before, including the Iced Earth, Sabaton, ReVamp tour. Plus there would be a reunion of Sam Black Church, a Boston band with deep roots and influence on other bands from Massachusetts. I chose to report about the festival in a three prong attack: labelling these sections to the good, the bad, and the ugly.

The Good: After getting sustenance at the local Pizzeria Uno grill, around 4:20 p.m. the German band Kadaver quietly hit the stage. Their sound is an infusion of late 60’s/ early 70’s blues rock, doom metal, and maybe a pinch of the stoner scene. The songs sweep you in a heavy, hypnotic manner. Their 30-minute set made a believer out of many. Michigan’s Battlecross performed last year on the upstairs stage, making such an impression that they were invited back for a return visit- this time on the bigger downstairs stage. They didn’t relent during their 30 minute set- opening with “Force Fed Lies,” moving comfortably around both of their records Pursuit of Honor and War of Will. Vocalist Kyle ‘Gumby’ Gunther is a prime time front man, commanding the audience for fist pumps, chanting, and circle pit action. Even the cord snafus didn’t hamper bassist Don Slater in his low end dexterity antics. Energy exchanged back and forth made “Get Over It,” “Caleb,” and “Push Pull Destroy” strong anthems. There’s a reason why you are continually hearing about this modern style thrash band – they deliver each and every time.

ReVamp showcased their heavier gothic metal to the masses for the first time properly in North America on this tour run. Vocalist Floor Jansen has an engaging personality, kindly accepting all the applause and cheers as the band ran through songs from their two albums. She is the new singer of Nightwish, but assured the audience that her band will be back for another tour run soon. I was surprised at her multi-faceted vocals; even her death growls rival some of the best males in the business. “Hang ‘Em High” and the collaboration with Devin Townsend “Neurasthenia” had the crowd clapping, jumping, and enjoying the sextet as well as can be expected.

Sabaton stole the show in my opinion. These Swedes have a potent sound, war-themed lyrical stories that the audience can relate to (and learn about), and at this point know how to command a stage from smaller clubs to the Woodstock Festival in Poland at over half a million people. Joakim Brodén kept his stage patter to a minimum so that they could fit ‘two more songs’ in their final 9 minutes. Again, 30 minutes got the crowd pogoing, chanting, and dancing in the aisles- plus screaming back at them key chorus moments for opener “Ghost Division,” “Primo Victoria,” and closer “Metal Crüe.” The single for their upcoming album Heroes “To Hell and Back” met with strong approval, the Celtic background flair possible to gain more followers to the Sabaton legions. Let’s hope for bigger headlining outings on this record stateside, as they are primed and ready to conquer the globe.

Unearth are one of the local bands who’ve worked their way up the ranks through a series of potent albums. Part metal, part hardcore – and vicious when it comes to the art of “the breakdown,” the audience started breaking out into bigger pits on the floor. And it continued even more when Sam Black Church hit the stage for another reunion show. I remember seeing SBC at least 15 times in the early 1990’s – as a fixture of the scene, their crazy heavy sound forcing you to move in one way or another- as vocalist Jet zoomed across the stage, hamming it up with the crowd, stage diving, crowd surfing, and rubbing the heads of his bandmates, security, and fellow audience members. He may be a little older and gray in the hair, but the songs and spirit remain intact. My only bummer was not hearing “Big Barbeque,” but in the end, the band prove why they are so influential on the heavy music scene.

The Bad: Nile aren’t necessarily the worst band in the world. Yet after 20 minutes of their set (and playing right before Iced Earth), I just felt like their brand of technical Egyptian-oriented death metal was a pure wall of mud in terms of sound – making any individual song indistinguishable. Closing with “Black Sea of Vengeance,” the crowd on the floor ate it up – so I guess that’s all that matters.

The other bad part would be the delays on stage in terms of technical difficulties. It started before Unearth’s set in terms of the guitar and only got worse at the start of Sam Black Church’s set. Everything was running on time…and then Iced Earth became the third band struggling with the proper guitar sound, meaning their scheduled start was put back a good 50 minutes ‘til almost 11:30 p.m. I don’t know if it was the house staff or the touring soundman that can accept responsibility, but in my view, stick to schedule and if it means your set time gets cut to keep things moving along, so be it.

The Ugly: Iced Earth would already be behind the eight ball in terms of being the final band after a long day and night of bands. Starting off late meant they would only get to play for approximately 55 minutes. And after the first song, the title track from their new album Plagues of Babylon, you could tell something was amiss. Guitarist Jon Schaffer’s guitar would be extremely loud one moment, and non-existent the next. Vocalist Stu Block would be ear bleeding loud for a chorus, then buried in the mix for the verses. Lead guitarist Troy Seele played a lead during the second song “Democide” – or at least it looked like he was playing it, because the sound man had to turn him up to be heard.

Yes folks, this continued throughout their set, and made things very disappointing as a longtime Iced Earth follower, not to mention my first time seeing them live. “If I Could See,”  a power ballad written to heal the wounds of Jon’s grandfather’s death, was a nice reflective moment, and “V,” “Burning Times” and “Red Baron/Blue Max” tried to move the crowd, but you could sense a general level of energy leaving the room like a deflating hot air balloon. The band would return for a two-song encore and end with “Iced Earth,” but I for one, would be very upset if this is the band I came specifically to see. I don’t know whether to lay the blame at the feet of the house sound or the touring entities – or just the general backline issues that can crop up at an all day and night festival.

And seeing females physically attack each other in the pit wasn’t cool either – security did take care of matters quickly, but me thinks that liquid courage got the best of both of them. Something that seems to mar many a United States festival, you would think that people know when enough is enough.

So ends another NEMHF. I’m sure next year’s edition will continue to deliver the best in hardcore and metal from New England and around the world.