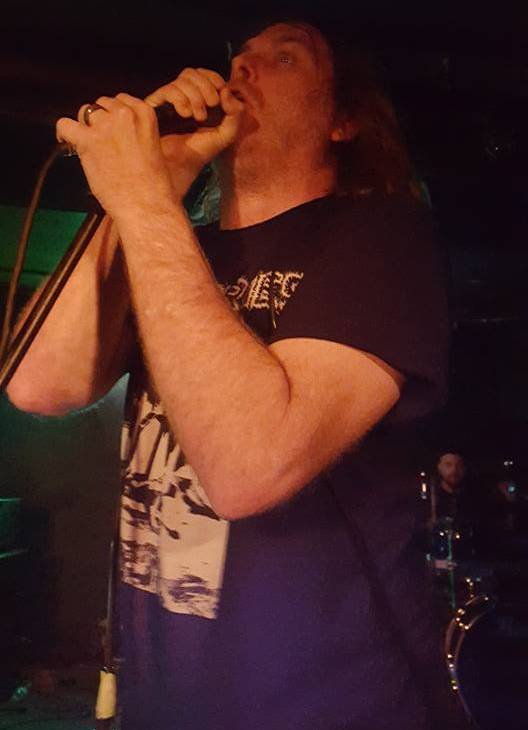 The good thing about living near a smaller market is that occasionally you get the scraps from the bigger tours (and don’t have to sit through all the bands, which is sometimes a blessing in disguise). Last month, Sister Sin and Shattered Sun rolled through town on an off-night from Mayhem Fest, and now we were given the choice partners of Cattle Decapitation and Beyond Creation from this year’s Summer Slaughter.

Running a little late, I actually missed the opening band (a rarity as I do like to see things start to finish) but made it just in time for upstate NY’ers Declension to hit the stage. Remembering them vaguely from a show a few years back, their brand of death metal with some hardcore vibes (the Upstate special, one might say) was definitely enjoyable. The band is currently without a vocalist (if you are in the area – get in touch), but had a replacement that seemed to handle the job just fine. There was some killer groove on the tracks (particularly the second song they played – not sure the title), and it made a good start to the evening.

Next up was local act Necroptic Engorgement, whom I’ve seen a number of times opening for various bands, just not in the span of starting to write here at DR. So it had been a while since checking out their live gig. The slamming death metal 3-piece was as strong as ever, belting out their dual vocalist attack while moving between slamming grooves and blistering grind. They played a new track (from their upcoming release this fall) as well as a solid mix of tracks from their past (“Shredded Vaginal Cavity,” “Born in the Morgue”), with a pretty strong reaction from the audience (including a small pit that broke out for a few seconds at least).

Moving on to the main events, Beyond Creation hit the stage and seemed to get the audience in a trance. In a good way of course – watching them play was actually quite mesmerizing. It seemed one’s head needed to be on a swivel to go between Simon Girard (guitars), Kévin Chartré (guitars), and Hugo Doyon-Karout (bass) at any given moment, as the three seemed to be in a constant battle of which one could out-do the others – all whilst trying to get some quality headbanging in as well. Watching the dexterity of their fingers moving alone was worth the price of admission. They band played a solid mix of cuts from both The Aura and last year’s Earthborn Evolution, including “Earthborn Evolution,” “Coexistence,” “Fundamental Process,” “Elusive Reverence,” “Omnipresent Perception,” and more. The band was seemingly commanding the stage, and their wireless instruments made it easy for them to take full advantage of the space they were given, which made things all the more impressive. What a treat to see this band in the live setting!

Cattle Decapitation took little time to show the audience why they were the headliners. Opening with a one-two of new material (“Manufactured Extinct” and “The Prophets of Loss”), the small but energized crowd quickly took to the material. Vocalist Travis Ryan’s onstage facial expressions and gutteral noises making it difficult to look away from (some of the sounds he is able to perform seem not meant to come from a human being), but the rest of the band (Josh Elmore, David McGraw, and Derek Engemann) held their own with an altogether intense performance. A rare treat to see Cattle Decapitation as the headliner (though they’ll be heading out again soon on a full headline tour), they stuck mostly to the newer material from The Anthropocene Extinction (“Clandestine Ways,” “Pacific Grim,” “Mammals in Babylon”) and Monolith of Inhumanity (“A Living, Breathing Piece of Defecating Meat,” “Your Disposal”). But they dug out some material from their back catalog as well (including “Total Gore,” “The Regurgitation of Corpses,” “Joined at the Ass”) to spice things up. Of course, “Forced Gender Reassignment” was a certain highlight, firing back up the mosh pit to one of its more intense moments of the evening. It’s clear there’s a demand for Cattle Decapitation to headline at this stage in their career, and they are more than ready.