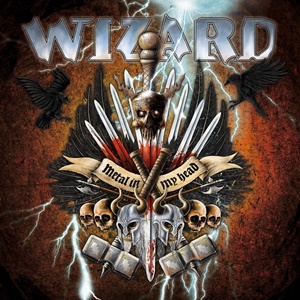 For any band twelve studio albums represents quite an accomplishment – and that’s a feather in cap for German heavy metal act Wizard with Metal in My Head. Gaining a new second guitarist in Tommy Hartung last year, the strength of the group remains a core lineup that has been there since the start in 1989, and that’s the case with vocalist Sven D’Anna, guitarist Michael Maass, and drummer Snoppi Denn (bassist Arndt Ratering joining in 2013). Going through a few label deals with B.O. Records and Limb Music during the 90’s and early 2000’s, they’ve been a part of Massacre’s roster since the Goochan album in 2007 – this scribe familiar with a lot of records in that run, including favorable outings with Thor in 2009 …Of Wariwulfs and Bluotvarwes from 2011.

Writing and recording the album during the pandemic fueled the desire to make this a record worthy of their back catalog – continuing in the epic tradition that keeps this Teutonic at heart while accessing a passion for Manowar, Judas Priest, and others in that steel-led battalion. Expect riffs that herald honor and glory, easy on the brain choruses filled with mead-hall gang choirs shouting ‘Fight’ or ‘We Are Proud”, as well as a bevy of double kick/athletic-oriented fills to keep the proceedings 100% metal. Most of the material glides along in steady three/four-minute clips, with only “Destiny” as a closer reaching 5:10 – Wizard careful to cut out any extraneous parts, keeping narrative/intros to a minimum. Cultural guitar harmonies fuel “I Bring the Light into the Dark” – Sven confidently delivering emotional melodies as the bass/drum interplay goes from speedy passages to slower, epic strains. Delivering a song about their career and affinity for the genre, “30 Years of Metal” is a track about resolve, critics be damned throwing caution to the wind and proclaiming their stake in the genre. “Whirlewolf” as a tender cover ballad features piano parts from Feanor’s Gustavo Acosta, Michael and Tommy carefully choosing some solid axe moments wrapped around a tremendous multi-octave performance vocally from Sven. A natural drum tone keeps the record from sounding too synthetic, digital, or robotic – yet at other times the incessant use of specific choruses (especially in the title track) can batter the brain worse than nails screeching down a chalkboard.

Metal in My Head as a whole doesn’t disappoint the long-time followers of Wizard – it’s representative of a tried and true style featuring fiery guitar work, a steady supply of dynamic songs, and ideal performances. It’s also not exactly going to set the world on fire – so proceed accordingly. 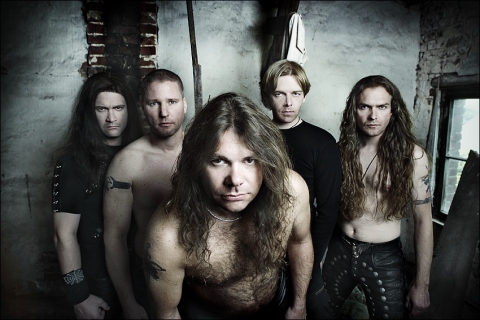