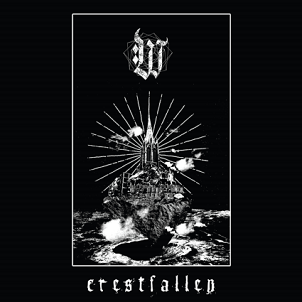 Doom’s ugly, dreary underbelly is represented rather well by Floridian newbies Weltesser on their Crestfallen debut. They read like a sludge band who nearly bored themselves to death playing sludge, so they converted to doom. Appropriately enough, the band is inspired by Dystopia, His Hero is Gone, and Black Sabbath, so there’s the required crossbreeding. That’s not quite enough to make up for the band’s murky, if not slopped-up approach to doom on Crestfallen.

It’s of little use to mess with the simply brutal and garish guitar tone here. It’s heavy enough to shake ‘yer foundation. That’s well and good, but it almost makes for somewhat of a hazardous listen considering Weltesser’s total avoidance of dynamics and structure. It’s right there from the start on “Regret,” where a (black) sea of crashing and combustible riffs go at it at half-time. The distorted bass plumes that kick off “Guide” are eventually pushed out of the way by more gaudy mid-doom roofs and post-hardcore shouting, while feedback tends overwhelm and plunge “Rats” into Eyehategod territory.

Perhaps Weltesser are the type of band who prompt folks to head for the exits when they play live due to their sheer abundance and volume. Who knows. On record, however, the band has created a rather unseemly affair, the type that borders on unlistenable. No one ever said doom had to be pretty (you could hear My Dying Bride’s Aaron Stainthorpe disagreeing from his candle lit room), but Weltesser have popped out an album with nothing in terms of grace and subtlety.