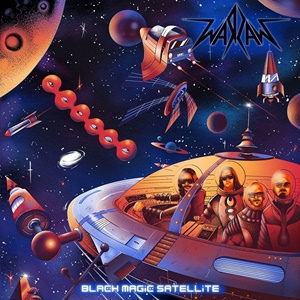 Honoring the promise mentioned in their last interview on Dead Rhetoric that a new album was in the offing sooner rather than later, Norwegian metal act Warzaw capitalize on their debut Werewolves on Wheels album with a second full-length in the same calendar year for Black Magic Satellite. Nailing certain requisite trademarks on appearance/image alone (spiky band logo and striking space age cover art), the quartet aims to crank up the volume and develop more driving heavy metal with melodic hard rock/bluesy qualities that possess mass appeal for fans of the old school brigade.

When you have two guitarists in Trond Jullumstrø and Håvard Alvarez that can churn out addictive rhythms and add tasty lead breaks plus endearing twin harmonies whenever possible, you might as well use those tools to the highest degree. That’s why visions of Iron Maiden and Accept pour through on excellent, pedal to the metal fare such as “Fierce Attitude” while pushing a bit of older W.A.S.P./ Dokken into the mix for “Where the Bodies Are Buried” (the main riff a distant cousin to “Don’t Close Your Eyes” from Tooth and Nail). A nastier, dirtier atmosphere appears between the pumping bass and mid-tempo groove for “Send My Regards”, the sneering chorus from Daniel Rønning injecting more of his versatile personality, while the gang background vocals certainly encourage plenty of audience engagement. Even a slower track like “Shot of Poison” isn’t necessarily a straight-up commercial ballad, the layering of clean to electric progressions allowing the musicians to stretch a bit in thoughtful transitions as well as giving Daniel a chance to deliver deeper, high range melodies in spots. The organic tones and production values are also welcome and highly appreciated – the snare/kick combinations are very authentic, allowing the listener to feel like they are taking in this act in a natural state.

A logical follow-up to the debut, this record capitalizes on the band’s strong vocal melodies, background harmony support, and proper phrasing/execution of those key riffs, hooks, and stirring lead breaks that make for some headbanging material – cementing itself deeply into your heart and soul. 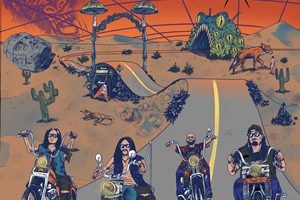