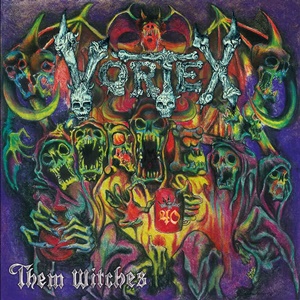 Originally developing in 1979, Dutch heavy metal band Vortex released a series of demos and appeared on split outings before their Metal Bats EP came out in 1985, followed up a year later with their debut album Open the Gate. Never achieving a major breakthrough outside of the underground, they would breakup by 1990, but have been much more active since 1998 – Them Witches now the sixth studio record. Two of the main players are still active in the lineup with vocalist Jurjen Tichelaar, guitarist Martjo Brongers, while drummer Henk Bosma, bassist Rene van Zonneveld, and second guitarist Orion Roos round out the quintet.

It’s evident just from the colorful, bats to witches to skull ratio bursting from the cover that these gentlemen continue delivering a traditional, old school platform of songs that retain a lean, mean sound that keeps the sound as analog as possible considering these digitally driven times. Speed isn’t a prerequisite versus proper atmosphere,the catchy riffs and easy on the ears chorus parts an essential component that audiences can latch onto quickly. Often the players will take a bass or drum hook and build it outward and upward through marching riffs and supplementary lines that emphasize the theme of the song – check out “Death at Dawn” for it’s older, Mercyful Fate-ish overtones, or the Tipton/Downing-like guitar parade from the late 70’s/early 80’s that makes “Gonna Hit You” a blue-collar anthem. Martjo and Orion can infuse the material with the right twin guitar harmony that causes spontaneous air simulations during “Five Fall”. What can be a possible sticking point for some listeners is the gritty nature of Jurjen in terms of his mid-range to higher melodies – this scribe isn’t saying it would be a huge deterrent for enjoyment, but it has more of that German-esque strain than a pure Dio/Halford/Dickinson style singer. You’ll know right away on “Spiritualien” if it’s in your wheelhouse, but the gang-like choruses during a track like “Fearless” along with the unison bass/guitar harmony interplay should keep audiences clapping and cheering in unison.

Vortex is a band that won’t set social media platforms abuzz about being ‘the next big thing’ – they just perform in a known, traditional metal way and will keep it true to their satisfied hordes. And we need bands like this from time to time to remind us about the roots of the scene.