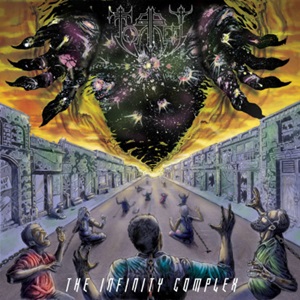 Originating in 2011 and hailing from western Canada, Torrefy take many elements outside the thrash realm to concoct their own progressive brew on this second full-length The Infinity Complex. Admirable certainly, as who wants at this point to hear a sixth-generation Exodus or tenth rate Slayer wannabe this many decades in the game? Considering the tools of the trade on hand, distinctive nuances separate contenders from copycats, and after a few spins it’s easy to hear that the musicianship, song construction, and one of a kind vocals will put this quintet in a strong impression category.

The bluesy, wah wah lead break on “The Singularity”, the upfront bass plucking on the melodic/harmony-driven roller-coaster “Hypochongea”, or thick down picking rhythms for “Killed to Death” showcase three tracks of nine that represent individual influences from doom to power to progressive and even black metal to give Torrefy specialized character. Which means everything from frantic, Skeletonwitch parts next to Megadeth or Immortal could come up- often within the same song as most of these tracks hit the six to nine-minute mark. Drummer Daniel Laughy puts in a monster load of thought behind the blasts, grooves, and dynamic transitions on “Celestial Warfare”, and the sci-fi/ mortality word angles provide deeper, intelligent lyrics to ingest. The maniacal screams of vocalist John Ferguson could be a deal breaker for some – as it’s like taking Randy Blythe and David DiSanto (Vektor) to another ear-piercing level, sure to cause bloody mayhem in the aural landscape. His occasional rapid-fire forays (especially on closer “Trial by Stone”) bark more than bite, weakening the impact of the main riffs on hand.

The ripping open of the universe in the sci-fi cover art clues you in that Torrefy possess superior abilities on the progressive thrash front – if only they can reign in some of the one-dimensional vocal attack elements, they may capture a wider birth of followers.