Time Shadow – A World Beyond (Self-Released) 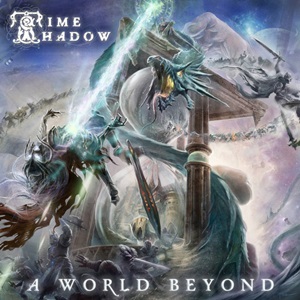 Continually staying abreast of metal acts from all countries, Time Shadow come from the Eastern European country of the Ukraine – originally developing their power metal sound with native language lyrics. Feeling the need to go after a broader international following, they’ve since moved to English lyrical content – issuing A New Day as a four-song EP last year, setting the stage for the full-length follow up A World Beyond. The artwork alone almost made this a dead giveaway of sonic expectations before airing a note – as battle scenes with warriors and lightning can do.

A three-man operation (since a human drummer isn’t listed, we’ll go with programming in that department), these nine songs feature highly melodic vocals and mid-tempo to slightly faster musical constructs – channeling many familiar suspects in the 80’s/90’s European power/traditional ranks. The uplifting keyboard/guitar chord choices and higher register falsettos during “Lord of the Dreams” for instance will certainly convey similarities to Sonata Arctica and Stratovarius, while other songs appear to be much more straightforward in a traditional metal template, such as the Hammerfall/Judas Priest riffing throughout “Ashes”. Andrew Melnik handles the guitars and bass while Vladislav Titarenko fulfills keyboard and backing vocal duties, shifting seamlessly between standard anthems and adding more of the classical textures to a more dramatic ballad offering with “A New Day”, where Andrew takes extra effort to squeeze out a carefully placed lead break with each note sustaining emotive impact.

The major downfall in this record lies in the melody choices and register conviction for singer Artem Soleyko. He has the strength to be upper caliber a la Michael Kiske or Tobias Sammet during a faster number like “Fly Higher” – but there are numerous times where he simply chooses to follow the chord progressions to the hilt, rendering “Attack” to flat line status before it even gets beyond the first chorus which is equally cringe worthy. Maybe this is a case of hiring an outside producer to call some shots and possibly tighten up these misfires – because Time Shadow isn’t the worst power metal band these ears have heard. At this point though they aren’t ready to hit the stage opening for their heroes either – so put A World Beyond in that lurking potential yet unrealized category.