The Howling Wind – Into the Cryosphere (Profound Lore Records) 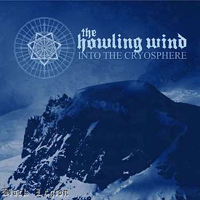 Black metal merged with sludge merged with To Mega Therion-era Celtic Frost…now that’s a concept we haven’t explored. The pair of Ryan Lipynksy (Unearthly Trance) and Tim Call (Aldebaran) do a dutiful, almost workmanlike job of not adding to the morass that is modern day black metal, preferring to keep matters grimy and unsettling throughout the duration of Into the Cryosphere, which is the band’s second full-length.

Into the Cryosphere wisely stays away from typical BM conventions, opting to let the atmosphere and crisp, but not clean production job of Colin Marston (Krallice) do the talking. There’s a nice selection of prime-Celtic Frost riffs being tossed about, most notably on “Teeth of Frost,” (the solo around the 4:30 is also quite Tom G. Warrior-esque), which is perhaps the most fitting example of what The Howling Wind is about. A well-placed atmospheric bit (“Obscured Pyramid”) sets up “Ice Cracking the Abyss” and “Will Is the Only Fire Under An Avalanche” nicely, allowing for again, the creepy CF vibe to take hold.

Hardly a conventional black metal release, Into the Cryosphere is perhaps a true indicator of where the collective headspace is of American black metal. Without a real template in which to work from, most of these bands go off and do their own thing, which in the case of The Howling Wind, works in their favor. Best off all, this thing doesn’t wear on one, doesn’t overload the senses or repeat itself. Why can’t all black metal be like this?