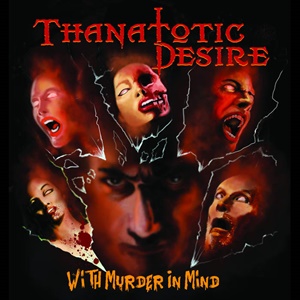 A derivation of the Greek term for executing the primal urge of death, decay and destruction, Thanatotic Desire embrace a potent death/thrash metal blend on their second full-length With Murder in Mind. Starting in 2007, re-imagined in 2011, and moving along strong since 2012- three of the four original members continue forward still (rhythm guitarist Anthony Capozzi stabilizing the re-imagined lineup) and its obvious these musicians possess a wide swath of melodic death/thrash talent – pushing forward a sonic attack that most listeners will welcome convincingly.

The searing rhythms and fluid lead/harmonic guitar action from Anthony and fellow guitarist Ben Moore galvanizes the troops, throwing a flurry of divebomb, tapping and shred techniques against the conventional thrash/melodic death approach. Check out the up and down neck action during “Mansion of Murder” for instance and you’ll hear spots of mid 80’s Iron Maiden/ Riot spider web antics, the rhythm section pushing and pulling between semi-thrash and conventional, traditional metal tempos that allows the twin action to shine. Three brief interludes break up the main songwriting in “With Murder in Mind” segments, offering chilling horror movie oriented narratives (Part 2 especially with the gurgling female choking on her own blood), and the performances contain plenty of dynamic diversity, most evident in the doom strains and atmospheric textures for “Comfort in the Cold” – where bassist Will Winton and drummer Dave Frech set the tone early on before ramping up the speed into another harmonic-fueled odyssey into death/thrash land.

It’s difficult to pinpoint one or two specific bands for context sake – there is plenty of the aggression and musical intuition that makes bands like Battlecross and Goatwhore so potent, but again they also inject many of these twin guitar elements where the aforementioned Maiden, Riot, and others in that gun slinger mold come to the forefront. Will also handles the vocals, using a mixture of screams, howls, and savage grit to keep the intensity at a similar Gumby/Battlecross level, if thrown through more of a Lamb of God veneer. It’s hard not to hear ‘liberty acquired violently’ reverberating through the old noggin’ as the ending line of “Land of the Free (Home of Our Grave)” hits the temple and not want to take some form of action in response. Thanatotic Desire have been making quite an impression over their decade-long existence – and based on this eight-track effort, it’s easy to understand why. Melodic thrash and death fans should equally appreciate this under 30-minute album with ease.

Thanatotic Desire – Murder on the Brain