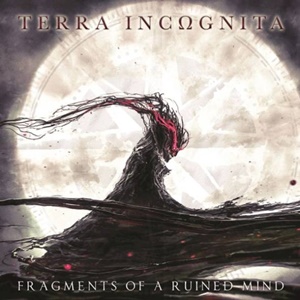 This Greek band recently fulfilled their promise of issuing a second full-length, as the Sign with Blood EP previously reviewed by this scribe set the stage for more of their traditional/power metal sound that cuts itself from the 80’s cloth. Those long-timers in the metal scene remember when Queensrÿche were a potent, influential band (especially from their self-titled EP inception through Operation: Mindcrime) – well Terra Incognita choose to use that launching pad as well as other US metal acts for the basis of their melodic, soaring approach. Three of the four EP songs make a return appearance, along with eight other cuts that continue to pine for a catchy style that may not necessarily be explosive, but damn it’s quite addictive in terms of swinging hooks and harmonies.

Expect guitar play that throws two or three counterpoint riffs at a time during instrumental sections, while being very refined when vocals kick in – generating excitement on all fronts during the uplifting “The Word” while relentless in attack for the Vicious Rumors/Primal Fear-oriented “The Midnight Lies”. Bass passages against cascading clean/distorted guitar sequences give a ballad such as “Covenant” that necessary darker ambiance to keep Terra Incognita away from typical slower fare – and allow singer Billy Vass ample opportunity to sustain many spectacular notes in lower to high registers a la Geoff Tate or Ronnie James Dio. Rhythm guitarist Stellios Zoulias adds his growls on a supplemental basis and only when necessary, possibly hedging the band into modern territory for that aspect. Firewind guitarist/keyboardist Bob Katsionis gives the band a sharp, potent mix as producer, mixer, and master man – very much in league with bands like Lethal and Psyco Drama during the late 80’s to mid-1990’s. The keyboard/orchestration parts pop in and out for mid-range enhancement, often aiding the melodic cause to improve sustained sing-a-longs or headbanging action.

Fragments of a Ruined Mind proves that not all power metal need be Teutonic or ‘happy’ to get its point across. Terra Incognita will have its flock that appreciate those sterling riffs, harmonic build ups, and multi-octave vocal melodies – count this scribe in that mix.