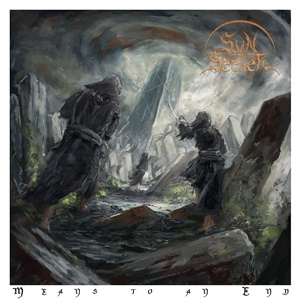 Thankfully reaching out to this CT act through Instagram, Svn.Seeker (pronounced Sun.Seeker) have been together since 2017 and finally releases their debut EP in Means to an End. The four-piece contains former guitarist Nikita Khrenov from Archaic Decapitator, and the listeners can expect a savage intertwining of melodic death metal influences from both American and Scandinavian shores – including the right mix of dynamic twists and turns to keep listener engagement at peak measures.

Instantly the intensity of the rhythms, proper transitions from blast beats and speed to groove sequences as well as the razor-like venomous screams and roars take these four main songs into the hearts of those who love 1990’s/2000’s artists like In Flames, Hypocrisy, Soilwork, and Arsis. Knowing when to inject the flashy blast measures or skilled fill work and then allow the layers of guitars to dominate ears into submission makes “Seeking My Own Sun” an early highlight, as fellow axe man Geoff Chance along with Nikita race up and down their fretboards like bullet trains during the follow-up “Death of a Judge”. Drummer Pat Conaty has a lot of fleet snare hit tricks beyond the normal thrash/death maneuvers already in his natural wheelhouse – his abilities put him in a similar class as Dirk Verbeuren (Megadeth/ex-Soilwork) and Daniel Erlandsson (Arch Enemy) as the man switches things up from first to fifth gear effortlessly. Additional synth programming adds a bit of melodic balance to the mix, while Nikita’s vicious, raspy vocals keep Svn.Seeker in that death metal category, taking into account the feel of Peter Tägtgren (Hypocrisy) or the late Alexi Laiho at heart, holding out sinister notes as if his life depends on it during the verses and chorus of the closing title track.

At 18 minutes and change, you have the work of a very impressive debut EP from Svn.Seeker that could vault the band into the hearts of every melodic death metal fan. Focused, skilled songwriting and outstanding performances that get the job done, and hopefully will be the start of a long and fruitful career for these gentlemen.