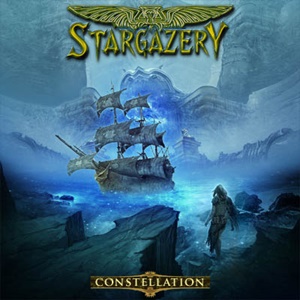 Five years have passed since the last Stargazery album, and outside of vocalist Jari Tiura and guitarist Pete Ahonen, a whole new lineup for the Constellation record. Drummer Ilkka Leskelä joined in 2017, followed by bassist Marko Pullila and keyboardist Pasi Hiltula entering last year (although Burning Point bassist Sami Nyman appears on four of these songs). Already familiar with their first two efforts, the quintet produce a melodic metal platform that is equally keyboard-driven as guitar-oriented, aligning well with those who love Deep Purple, Rainbow, Tony Martin-era Black Sabbath, and a bit of Gary Moore/Whitesnake for versatility’s sake. How do these ten songs stack up next to those impressive outings?

The distinct, dramatic bluesy delivery from Jari clearly stands out amongst the singers of yesteryear – he’s not going to hit those bird call highs, preferring to be smooth and subtle in his mid-range charm. The synchronization of keyboard/guitar lines during “Self-Proclaimed King” illustrates a comfort zone for Pasi and Pete, aligning to let the musical hooks be supreme over self-indulgent exercises in technical prowess. Allowing breathing room for Jari to enchant the listeners with some stunning harmonies as Marko’s bass lines handle some of the low end musical might, “I Found Angels” is a mid-album ballad highlight, Pete adding some thoughtful acoustic and electric breaks that are solid in the Ritchie Blackmore/Gary Moore camps of construction and execution. When the band wishes to go into a more uplifting, triumphant power metal route – the almost six-minute title track checks off all those boxes with speed, fluid guitar/keyboard neoclassical tradeoffs and runs, plus solid double kick/fill work to bring all the energy home. The second half of the record has a bit of a trail off in quality – especially the keyboard/vocal unison work during “Dark Side of the Moon” that has obvious commercial leanings, maybe too much so during the overtly pop-like chorus. The closer “Raise the Flag” rallies the troops, with a Europe-style keyboard intro and the epic Black Sabbath riffs marching along for Jari to showcase his strident confidence in that Tony Martin meets MSG slot.

This could be a transition record for the three newer members, but Stargazery aren’t shifting from their sweet spot in the melodic metal realm. Constellation probably has more appeal with the age group 35 and above, but there’s plenty of integrity and quality material to enjoy.