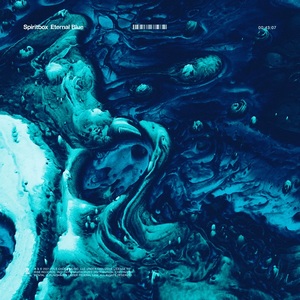 If there has been a big moving band in the metal scene in the last year or two, it’s definitely Spiritbox.  Comprised of former Iwrestledabearonce members Courtney LaPlante and Mike Stringer, the groovy and sometimes esoteric post-hardcore act gained buzz after a few self-released EPs and singles with “Blessed Be” and “Holy Roller” last year, to the point where many in the community had their eyes set at this first full-length offering.  Eternal Blue comes with high expectations and justifies its own hype, not by necessarily being the aggressive beast that maybe some expected from “Holy Roller,” but a musical journey that ebbs and tides, providing a listening experience that only a few have paralleled this year.

Given the slew of pre-release singles that have been out there, it’s really the super-catchy and playful “Secret Garden” that held the most sway in terms of previewing the overall experience.  Hard-hitting numbers like “Holy Roller,” the storming “Circle With Me,” and even the almost nu-metal crunch and groove of “Hurt You” light things up like barnburners (with some juicy melodies to boot), but in fact, much of the unreleased album hits on a more somber and reflective note.  “Sun Killer” has a very atmospheric and eerie opening to kick things off, footing itself equally in groove and dreamy wonderings that act as a slow burn to a quick bludgeon before the finale.  “The Summit” is unmatched on the album with a poppy, saccharine chorus and uplifting melodic riffs that totally works, all while keeping it feeling totally genuine and sincere.  One listen and it’ll be in your head for the rest of the day (or week).  The title track offers up dark, hypnotic grooves in a dreary yet captivating way as it increases in intensity.

It’s really all about the placement of these tracks, and Eternal Blue feels incredibly meticulous in its arranging.  It practically begs to be listened to from start to finish.  Some well-placed heavy moments (“Yellowjacket” and “Silk in the Strings”) fuse together perfectly with some melodic and dare it be said, pretty moments such as “Constance” and the electronically-elevated “We Live in a Strange World.”  It will bring you down, and then raise you up to soaring, spine-tingling highs.  Frontwoman Courtney LaPlante is certainly a key element, and her strong mix of potent clean singing and some menacing roars (often in the same track, such as the heartfelt “Halcyon”) does wonders for the act.  But, given the flurry of grooves, intricate riff patterns, and nuanced rhythms (the bass has some great moments in particular), it all comes together to represent a strength greater than the sum of its parts.

The strongest thing Eternal Blue has going for it is song identity.  They could have easily picked any of the tracks on the album and justifiably chosen them as the next single, as they all have something to make them unique and stand out.  Whether you are in the mood for something heavy and ferocious, melodic and groovy, or uplifting and heartwarming, you’ll find it on Eternal Blue.  Beautiful, breath-taking, and still with a brutal, metallic edge.  Another strong year-end contender.