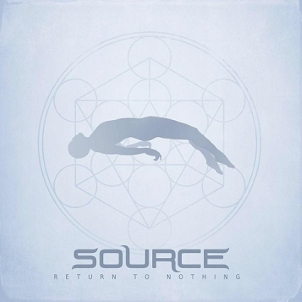 “Consciousness based music through the exploration of flotation tanks, philosophy, meditation, yoga, and other embodiment and mindfulness practices.” My, that’s a mouthful, even for our mouthy, sometimes malarkey-addled scene. Source are a progressive metal trio from Boulder, CO. who take noticeable cues from Tool, although there’s hardly the innate weirdness, off-time stalling, and darkness. Source does have some seriously long, if not bloated songs, some of which should be stripped down to make concise, more impactful numbers, thus identifying the biggest issue with Return to Nothing.

Fundamentally, Source have it down. Ben Gleason is a seasoned, easy-on-the-ears clean vocalist, with a radio-friendly touch to boot. The band’s rhythm section (comprised of drummer Georges Octobous and bassist Dan Crisafulli) is air-tight, able to hold down a tribal rumble and double-bass pairings in one fell swoop. More often than not, you get through the first verse and chorus and become drawn in—it happens on the gliding “The Essence,” the driving title track, and slippery “The Serpent,” which provides the best example of Source’s quality rhythm section. But, the band has no filter or identifier as to when to cut a song off. Almost all of these tunes are either eight, nine, or ten minutes long, but do not resemble the riff pile-ons that come from the progressive death metal scene. Instead, Source rarely deviates from a song’s origins, naturally causing them to drag on. (This scribe thought he nearly done with the album, but instead found himself on the title track, which is the fifth song in the running order.)

In what could have been a taut, immediate offering, Return to Nothing is nearly done in by its laborious tendencies. Make no mistake—Source are of quality, but someone needs to start bringing a stopwatch to rehearsal.