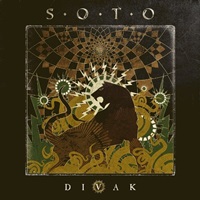 Singer Jeff Scott Soto has a premiere resume in terms of power metal legacy: especially if guitar heroes such as Yngwie Malmsteen and Axel Rudi Pell resonate in your listening landscape. Deciding to collect ideas and channel his pent up aggression and frustration in another direction, Soto as a band is the current focus, with Divak being the second album in back to back years (not the norm in today’s longer touring business model). And much like the previously reviewed Inside the Vertigo, the 13 tracks straddle the modern hard rock/power groove landscape that keeps Soto on more of a commercial slant both lyrically and musically, only occasionally throwing down some old school power metal moments that a lot of the thirty and forty-somethings treasure.

There’s a thicker, down-tuned guitar basis that aids a lot of the deeper vocal harmonies on a churning cut like “Fall from Grace”, the double bass and cymbal work of Edu Cominato coming from a finesse place while still accenting the groove as the lead break from Jorge Salan maintains bluesy grace as it moves from shred to emotive bliss. Other songs contain the familiar power strains and gallops that interchange in a Nickelback meets Shinedown in a Disturbed manner – the separator being Jeff Scott Soto’s remarkable range and resonance, choosing the right harmonization during first single “Weight of the World” and the semi-cyber awash follow up “Freakshow” (although the bass solo weaving into the guitar leads added a nice Billy Sheehan nuance).

The average fan will have no problem getting into the hooks as they are catchy in a simplistic bounce way – the semi-rapping that cascades against the chord progression for “Cyber Masquerade” won’t win many over though, despite the progressive bass spotlight, Soto is better than trying to appeal to that ‘tough guy’ crowd. Where he chooses to stretch on a ballad like “In My Darkest Hour” (not a Megadeth cover), he channels all the passion, care, and concern in lower to higher register work that recalls his mid-90’s work with Axel Rudi Pell. And you have to love the “Children of the Grave” riff groove through the second half of “Time” – proving Sabbath reigns supreme even in 2016 as they retire into the sunset.

Divak sees Soto gaining more confidence in their stylistic direction: modern and powerful. Problem is, will he gain enough interest from the download driven digital age to offset the old-timers who could leave the flock for not being their idea of ‘metal’? Time will tell.