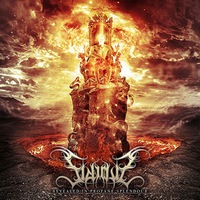 UK extremists Sidious bring forth their first full-length, Revealed in Profane Splendour, after last year’s Ascension to the Throne ov Self EP released last year. Containing of members of the doom masters Eye of Solitude, it goes without say that it will be a musically competent adventure. It just seems the band needs to get away from some of its directly apparent influences.

If nothing else, Revealed in Profane Splendour is a majestic piece of blackened death metal. The problem, as previously stated, is that of directly being able to rattle off the band’s influences. In this case, there’s a heavy dose of Dimmu Borgir and Behemoth, with a dash of Emperor on the side for good measure. While these are certainly names all would strive to imitate, there are simply too many points when direct finger pointing to specific moments can be utilized. Whether it’s the ICS Vortex clean vocals of “Annihilation of Abhorrent Credence,” the very Dimmu riffing structure of the beginning of “O Paragon, Bringer ov Light,” or the blasting drums and Behemoth intensity of “Sacrilegious Majesty,” it just seems that the band’s influences are too apparent. There is however, some cool chanting on the track “Infernal Reign” that offers a bit more personality and seems a better route for the band to follow than the ICS Vortex styled cleans.

Sidious has nailed this sound down, and to that end, it’s the reason that Revealed in Profane Splendour is still such an enjoyable listen regardless of the blatant sound-alikes. It’s just too bad, that given the capacity of the band members involved, that they haven’t gotten more of their own identity figured out. Perhaps with album number two?