She Must Burn – Grimoire (Artery Recordings) 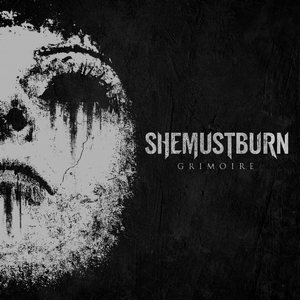 Most of us here at DR tend to have a generally unfavorable view of metalcore/deathcore (and its lineage), but nonetheless try to view things with an open mind. After all, one never knows when/where the next big thing will emerge from, not to mention the metal that would be sorely overlooked with said attitude. London-based act She Must Burn are a somewhat fresh group upon the scene, only releasing one 2015 EP prior to this release, and with Grimoire, seem to fit the category of emerging gem.

While some ties could be drawn back to the symphonic metalcore act Bleeding Through, She Must Burn offers a fresh take on the genre. Blackened/gothic keys create a dark atmosphere, and frequent turns into faster and blast-beat riddled territory create a vibe that should be equally friendly to ‘core and metal enthusiasts alike. The keys, although prominent, never overstep their bounds – occupying a role that enhances rather than dominants the mix. A thick, metallic crunch gives the riffs an extra layer of bite without resorting to djent trends, and the caustic snarls of vocalist Joe Sinclair have a more extreme credence to them, and the band avoids going into clean vocal mode outside of “Victoria.” However, there are some female cleans in three tracks from Aimy Miller (who has since parted ways with the band), all of which shine and shift the band from the blackened attack further into a gothic feel in a natural way, not unlike earlier Deadlock material. Also of relevance is the use of breakdowns. You can find some definitive breakdowns, most notably in “Hallowed Ground” and “Gloom,” but they don’t overplay their hand and rely on them. Balance is the key word, and they provide the proper build-up to actually make them work as a part of the song.

An impressive first full-length that seems to hit all the marks, Grimoire establishes She Must Burn as a band to watch within the ‘core scene. Bringing in additional elements such as blackened atmosphere and female vocals may not be entirely innovative, the way they’ve been genuinely infused into the music itself provides an exciting mix for those willing to test the waters.